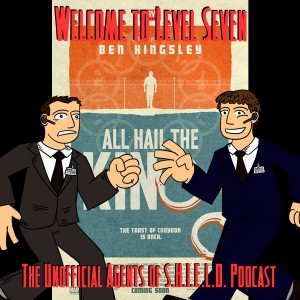 For this episode, while we await the return of Marvel's Agents of S.H.I.E.L.D., we turn our attention to listener feedback, a couple news items, and a spoiler filled review of the Marel One Shot, All Hail the King.

Heroes Reborn — Heroes is returning as a 13 episode series in 2015. Source: Forbes

The rumor he was contradicting: The Hollywood Reporter

Welcome to Level Seven has a “donation” episode — a feature length commentary about Howard the Duck! We are very excited to see this experiment come to fruition! https://welcometolevelseven.com/howard

Feedback covers T.R.A.C.K.S., Guardians of the Galaxy, and much, much more!

We talk about All Hail the King again, this time exploring specifics about what they liked and didn't like about this Marvel One Shot.