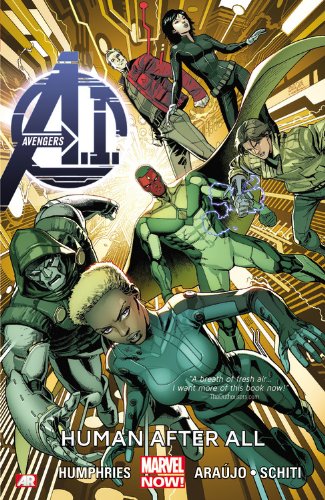 My first impression of Avengers A.I. by Sam Humphries was underwhelming. I read through everything in Marvel NOW! thanks to a well-stocked library so eventually I would run across this title. As I opened the first pages and saw an S.H.I.E.L.D. agent I thought I knew I was in trouble. Yep, Avengers A.I. was destined to be a comics file.

Hank Pym is a genius! And he defeated his greatest creation Ultron by creating another self-replicating artificial intelligence that adapted more quickly than Ultron. And in the course of saving the world he created a new living artificial intelligence. And this new creation may or may not be a new threat to the human world. Agent Monica Chang task Pym with controlling this new A.I.. And Pym calls together a new Avengers team of Vision, Victor Mancha and Doombot (what Doombot) to investigate and challenge this new creation calling itself Dimitrios. And Dimitrios has plans of its own as it reaches out to Vision, introducing him to the living A.I. within the Diamond. Can Pym and Vision save this new artificial race or will Dimitrios and the dwellers of the diamond be the end of all humans.

This is not the Monica Chang I know. In the Ultimate Universe Agent Chang is the ex-wife of Nick Fury, the Black Widow and a Director of S.H.I.E.L.D.. She is tough and a warrior. This Chang is a bookish and a little understated. In fact you get the idea you could push her around, really not the qualities one is looking for in the head of the S.H.I.E.L.D. Artificial Intelligence Division. This is a very different Chang.

Vision and Pym have a shared goal, they must save this new Artificial Intelligence in the Diamond. Most humans do not agree that this intelligence should have the right to thrive and make its own choices. It could be the fact Dimitrios and the Diamond Dwellers are attacking the human world in their attempt to free themselves for slavery. You really have to applaud Pym and Vision for seeing that the A.I. is a new life form and should have the rights to live.

I have never been a Pym guy, and maybe this is why I had no interest in Avengers A.I.. I will not say I got excited about Pym in this story, but I do think I understand him more. He is a genius. But he also realized he is deeply mentally flawed. And his greatest experiment is how to control a natural intelligence, himself.

Doombot cracks me up. He has no interest in being on the team. He has all the arrogance of Doctor Doom in an artificial body. It is awesome the way he treats the other members of the team, with straight out contempt. It brings a quirky humor I really enjoyed.   He even has some harsh words for Thomas Jefferson!

Pym has a grandson on the team, Victor Mancha the son of Ultron. Victor reminds me of Quicksilver in X-Men: Days of Future Past where he is optimistic and learning about the world around him that comes with youth. But Victor has troubles. He is the son of Ultron, is he programmed to betray man. In fact he knows in some future that he will. Pym attempts to show the young man that there are a number of possibilities in his future and there is nothing that says he must bring an end to mankind. The second problem is he needs a superhero codename. And his search for his true hero name is another spot of unexpected humor in the title.

I was wrong! Avengers A.I.: Human After All was really enjoyable. I look forward to seeing what is next for this team as some of their back-stories become more transparent. And I wonder if Pym will soon have an episode that could lead all mankind to destruction?