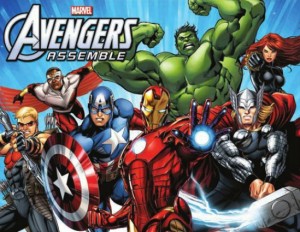 It is a long time before Avengers 2 but there is still plenty of toys to sell! In November 2012, Marvel wrapped up The Avengers: Earth’s Mightiest Heroes. But we cannot be long without animated MCU heroes. Recently Disney XD premiered their new Avenger title, Marvel’s Avengers Assemble, in a special one hour premier to fill that gap. We must ask ourselves, is it worthy of its Marvel Cinematic Universe heritage as we watch the opening story “Avengers Protocol”?

As this series opens, Red Skull murders Captain America. In response, Tony Stark activates the Avengers Protocol, reforming the former super team which had ended due to the danger it posed. Thor, Hulk and Hawkeye resume their membership. Additionally new recruit Sam Wilson who selects the Falcon costume joins the Avengers we already know. Black Widow also returns to aid the team while retaining S.H.I.E.L.D. agent status. The team travels to the artic where they discover that M.O.D.O.K. (Mental/Mobile/Mechanized Organism Designed Only for Killing) along with his A.I.M. (Advanced Idea Mechanics) forces are aiding Red Skull. By the end of part one, the Avengers discover the mystery behind Captain America’s death and Red Skull steals Iron Man’s armor to become Iron Skull. This loss of armor somehow seems to physically harm Stark. However in the second half of the arc he seems to have recovered with no real explanation. Iron Skull and M.O.D.O.K. attack the Avengers Mansion by using microbots to increase the aggression of the Avengers so they fight each other, in front of the world’s news cameras. Defeated by the new found leadership of Tony Stark, the Red Skull realizes he needs a team to help battle the good guys. The Iron Skull sends out invites to his villain team, do they have matching jackets I wonder, and one of those invitations is intercepted by S.H.I.E.L.D. and delivered to the Avengers. The pilot sets up a season full of super team battles.

I think my wife said it all, “It’s the first episode, Captain America, can’t be dead!” Yes, it is fairly safe to say that our Avengers in this series will always come out on top, leaving deaths and real resurrections to the live action world. And in many ways it is clear this series is to support and introduce viewers to that live action world. With a lineup that is focused on Iron Man, Captain America, Hulk, Hawkeye, and Black Widow this series clearly wants us to remember The Avengers. And the new Avenger, Falcon is a hero we will see in Captain America: Winter Soldier. And the MCU version of Nick Fury shows up for extra credit. We are fully expected to think The Avengers when we watch this. And lines like Hulk’s statement, “I’m always angry!”, flashes in giant letters, “Continue The Avengers here!”

S.H.I.E.L.D. is prevalent throughout the premier. Wilson is a S.H.I.E.L.D. recruit when he is called to assemble. He tells Fury that he has been called up to the big leagues. Fury yells out, “What’s bigger than S.H.I.E.L.D.?” Wilson runs off without responding. But apparently Wilson’s response is unacceptable as Fury fires Wilson, making him simply an Avenger. In a separate interaction between Hawkeye and Black Widow, Romanoff notes that Hawkeye ran away from S.H.I.E.L.D.. His response was at least he was not Fury’s watchdog!

Another comment from the smartest member of my family, “Why does the Iron Skull have a Punisher symbol on his chest and not that snake thingy?” You know as you turn your head, she’s right. It is more of a skull than a Hydra symbol. I wonder if the Punisher will join the Avengers so he can fight for his intellectual property!

Overall Marvel’s Avengers Assemble is a nice television show. My kids really enjoyed it. I never watched The Avengers: Earth’s Mightiest Heroes on a regular basis. Instead I spent my time watching shows like Young Justice and Star Wars: The Clone Wars. With these cancelled I do have time to pick up a new show. And the fact that the tone reminds me of shows like G.I. Joe and The Transformers from my childhood helps its claim to my time. Though it really is The Challenge of the Super Friends this series should remind me of, with battles between the Justice League and the Legion of Doom. So I will probably watch the next few episodes (but probably will not review them).

The Avengers are back on Disney XD. Okay with the power of reruns, you probably did not notice. It is clear that this newest edition wants us to be reminded of the Marvel Cinematic Universe and not the comic books. And based on the reactions of the under 18 crowd in my home, it is working!