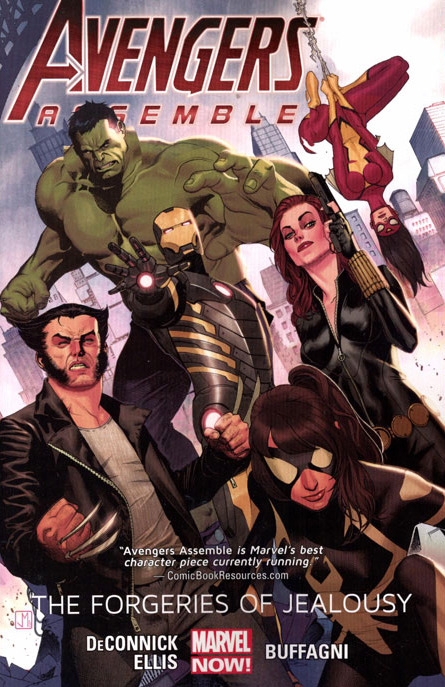 Preamble
What’s it like to be young, confidant, super-powered and in trouble in the Marvel 616?  Kelly Sue DeConnick and Warren Ellis give us a glimpse to this world through the eyes of young Spider-Girl in Avengers Assemble: The Forgeries of Jealousy.  Can Spider-Girl and the reader learn what it’s like to be a real hero?

The Terrigan Bomb has exploded and Inhuman cocoons are emerging throughout the world as those with the Inhuman gene transform.  One cocoon gets into the hands of villain Toxie Doxie who is obsessed with bodily enhancements and she looks to acquire the emerging power for herself.  But someone wants that cocoon back.  Spider-Girl comes to the Avengers for help to find that cocoon with her social studies teacher inside.  The youngster works with Spider-Woman, Black Widow, Wolverine, Iron Man and Captain America in a series of team-ups to find her teacher and answer the question was Spider-Girl every truly alone.

Level Seven Analysis
Those of us who enjoy the Marvel Cinematic Universe have to take note of this title and the fact that this collection contains its final issues.  This title was created to support our beloved Avengers and originally featured our main cast of characters working together in one title.  Since that time more of the Avengers came and went providing another dose of monthly Avengers.  For me though it may have been originally established to back up the MCU, but it seemed to end as a lighter Avenger title for those not looking to get into the heavier Earth protecting action of the main title.  And I would say while this is not an all-ages title, there is a lot of sexual innuendo slipped into this collection. But the story would typically be one that I would feel very comfortable letting my oldest child read.  And it could really be easy to give this to a tween since the hook hero Spider-Girl is young, cool and reminds me of many Tweens that I know in her attitude.  And maybe tweens won’t catch some of the more adult humor, but who I am kidding here?

We officially have a named team-up, Team Spider-Ladies, which is a combination of the two Spider females and Black Widow.  It is really cute and the naiveté of Spider-Girl with the hard edge of Black Widow is a very nice contrast.  And it is amazing how much softer Spider-Woman seems than Black Widow when an even deeper contrast is in the room.  Spider-Woman comes off as balanced despite being another super spy.

For each of our team-ups we get a lesson.  Every lesson that Spider-Girl gets is different and sometimes they contradict each other.  Iron Man in a very Incredibles sort of way contradicts and challenges one of Wolverine’s tips to Spider-Girl.  But really Tony, why can’t Spider-Girl look cool!

A.I.M. is rich!  Seriously A.I.M. is loaded.  Team Spider-Ladies establishes that A.I.M. is not a non-profit.  And the villains know the best way to make money is to spend money.  Black Widow even makes a suggestion that maybe we should take note of the cash flow.  Maybe instead of hitting A.I.M., maybe they should go after the money.  Also, the Avengers have to come in and defend A.I.M. as Toxie Doxie attacks their New York cells.  And it does feel weird, but it is all about international politics (man I miss the A.I.M./S.H.I.E.L.D. war).

Goodbye Avengers Assemble.  But maybe in the world of Avengers NOW!, grumpy Iron Man, female Thor, and Captain Falcon there is no room for you.  I could have done without some of the innuendo because you could have been a really nice all-ages book that was not childish enough adults could enjoy it but not mature enough that a kid could pick it up.  Maybe someone should take note of that need!  Team Spider-Lady, we barely knew you!