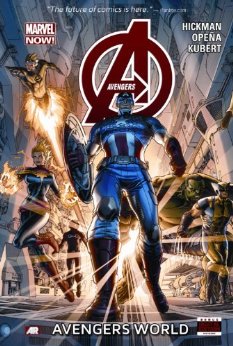 I have always been an X-Men guy. True confession, I have read more West Coast Avengers than Avengers. So I wondered if the new Marvel NOW! version of the Avengers would keep my interest in Avengers: Avenger’s World when my history with this super group is largely based on the MCU.

Tony Stark and Steve Rodgers see the problem. The threats are getting bigger. More strength is needed and the current Avenger roster cannot face these battles alone. So they lay down plans to expand the team if circumstances dictate it. With Ex Nihilo terraforming Mars and threatening to reshape the Earth, the Avengers travel to the red planet to challenge this cosmic force. Captain America is sent (thrown) back to earth as a message after the Avengers are captured by Ex Nihilo, Abyss and Aleph. With Hulk, Iron Man, Black Widow, and Hawkeye stuck on Mars, Rodgers activates the mechanism that swells the ranks with former Avengers like Falcon, Wolverine and Spider-Man and new faces like Cannonball, Sunspot, Smasher and Hyperion. Cap returns to Mars to battle Ex Nihilo and free his teammates. This story is followed by the fall-out of Ex Nihilo’s bombardment of Earth with Origin Bombs which unleash new life forms on the planet. And the origins of Hyperion, Smasher and Captain Universe are worked into the collected stories. The volume ends with a cliffhanger as Ex Nihilo’s liberated new man announces that the White Event is about to occur.

So this is an entry point. There are familiar heroes for me in the MCU core of Hulk, Cap, Iron Man, Hawkeye and Black Widow. But honestly expect for Cap the majority of them have supporting roles to the new team members. And those new members are largely characters I have no experience with. The new Smasher could have been anyone to me. Though I do like the addition of X family members in Cannonball and Sunspot. There is a lot of setup and recruitment in this volume as they reset the Avengers deck. But setup does not an exciting story make. And the villain for me is not overly Avengers iconic, where Uncanny Avengers used one of the most iconic of all in their reset in Red Skull.

Jonathan Hickman does do a good job giving us some background on some of the new faces, with Captain Universe, Smasher and Hyperion getting origin stories. I would say that I could not tell if these were original to this volume origins or retellings of stories elsewhere. And I admit I am missing things, like this is a new Hyperion, and I did not know there was an old one!

The Ex Nihilo storyline does feel like a continuation of another story that I have not read. And I felt if I had read it I could have been more familiar with where this story came from and was going. I really wish they had given a completely clean slate for the big bad of this volume, again like they did with Uncanny Avengers where the story started from mostly scratch and needing very little setup.

I have to admit, I am still an X-Men guy and not really in love with The Avengers to the same level. As an opening chapter under Marvel NOW! I feel like this is a partial win. Yes, the roster has been reset but as a relatively new reader to this family I also feel like I am missing information. And the cliffhanger failed to get me excited for the next volume. My current recommendation for those wanting an Avengers title is Uncanny Avengers with its large X-Men contingent.