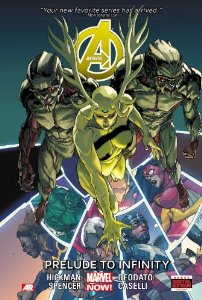 Infinity is coming, Infinity is coming!  Actually it came and if you follow this crossover monthly, well likely over.  Infinity did not work for me in single issues.  Most of that had to do with the feeling I was not getting all of the story since I was not reading all of the issues beyond the main title.  I am hoping that Jonathan Hickman and Nick Spencer's Avengers: Prelude to Infinity helps set me up for reexamining Infinity a few months from now in a collected format.

The aftermath of Ex Nihilo's origin bomb on the Earth continues.  In the Savage Land a group of Avengers led by Thor and Hyperion mentor a young society created by the bomb.  And the Avengers are called into action as the High Evolutionary kidnaps the children.  In the modern world problems are caused by a global EMP every six minutes which downs planes and creates havoc on communications.  And on A.I.M. Island something awakens from a cocoon and causes chaos.  Finally, aliens flee to Earth and Captain Universe warns something is coming, leading the Avengers to recruit new members of cosmic proportions.

Honestly for me the best story is the smallest.  Thor and Hyperion look into parenting in the Savage Land.  The story really brings out the character of each Avenger teacher including the Superior Spider-Man, Hawkeye and Spider-Woman.  The best moments are not the fighting between the Avengers and the High Evolutionary.  The best moments are between Thor and Hyperion (who I know little about) and discussion on the value of having someone to care for.  For Hyperion adopting the origin bomb children of the Savage Land is an important moment.

I do feel like Hickman and Spencer are arranging the playing pieces.  We have the Avengers recruiting the new members that I know are in Infinity.  Additionally, Star Brand prepares himself for what is to come.  And Captain Universe provides plenty of warnings about the future that may or may not be helpful!  Unlike the last volume, this volume really does setup what is to come in Infinity.

Our insight into S.H.I.E.L.D. in this volume is “The Hub.”  Here the Hub is a S.H.I.E.L.D. observation station from which Banner observes and investigates the global EMP.  Of course with an episode of Marvel's Agents of S.H.I.E.L.D. titled “The Hub” one must ask if they are the same base.  Honestly, we don't see a lot of this Hub at all.  We basically see a control room and it size wise seems much smaller than Coulson's Hub.  Of course that really could be since they only showed us one room in the comics.  Despite the fact these may not be the same Hubs, I liked seeing this title slipped into the 616!

I am ready.  I am ready to give Infinity another shot.  I am optimistic that getting the story in a collected edition will help my appreciation of the story.  And at this point, all of the deck chairs are arranged for the epic story!