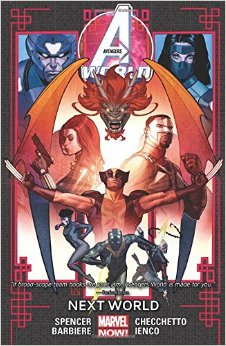 Preamble
It is a big world out there with many dangers.  Nick Spencer and Frank Barbiere take us into the day of a life of the Avengers fighting for that big world in Avengers World: Next World as Earth’s Mightiest Heroes face three world altering events.  Will our world turn into an Avengers World or a Villain World?

The Avengers face three threats.  In Asia, the island of Madripoor is perched on the back of a giant dragon preparing to attach Shanghai.  In Europe, the undead run the streets under the control of Morgan Le Fey.  And finally, S.H.I.E.L.D. and the Avengers must ally themselves with allies from the future to facedown the growth of the A.I.M. Empire.  The volume jumps between each story until the three reach their epic conclusions.  Finally, in the midst of AXIS, where heroes are villains and villains are heroes, Valeria Franklin approaches S.H.I.E.L.D. for help as Doctor Doom prepares to meet the Scarlet Witch head on.  Doom needs a team and only one agent can put together the right mix of low level heroes needed to save the day, Phil Coulson!

Can I be honest?  The three threat story if fine and all.  The beats feel epic and the inclusion of three Avenger like teams is interesting.  But really it is what grabbed my attention least.  Of course my eyes are really on Phil Coulson.  IT was him that I wanted to see, and my favorite agent delighted.  Though I will admit I did find it strange when he started walking around with a S.H.I.E.L.D. logo tee and a blazer.  I mean I would wear that and all, but not good old AC!  Really his scenes feel like he is foreshadowing his role in the comic S.H.I.E.L.D. as he serves as the superhero matchmaker.  He is putting the team together that Doom needs to have his victory over evil Scarlet Witch.  Honestly, the team is really not anyone most of us think we want on our side in the likes of U.S. Agent, D-Man, Stingray and more.  But as Coulson might point out they may not be the heroes we want but they could be the heroes we need!  This agent feels more MCU Coulson than Cheese Coulson.

Valeria Richards has been told by her father she can always find help from S.H.I.E.L.D. and clearly he has told Valeria a lot about the agency.  Director Hill admits that Reed Richards is always there for them and she easily agrees to help.  But Valeria’s intel does not stop there, she has some goodies she took and was not told by dad.  And one of these fun facts is about someone’s trading card collection!

The big theme in Avengers World is the Avengers must get bigger.  Captain America has beaten this idea into the roster.  Here we see it played out in a big way.  Three separate Avengers like teams in Euroforce, The Ascendant, and the Next Avengers stand beside the card carrying Avengers to face the challenges of the day.  So for Cap here is the victory.  Because the Avengers is not a roster but an idea.  And when the world calls for help someone answers!

Spencer does continue to build on his Secret Avengers run, with the Next Avengers all having a tie to that storyline.  My favorite moment may have been the use of the world “Reverie” with the expected impact.  And it really leads one to question who is and who is not a Secret Avenger.

Avengers World: Next World demonstrates that the Avengers are more than a team, but an idea to face problems in unity for the betterment of the world.  The Avengers, the Next Avengers, the Ascendant and Euroforce are all Avengers, even if they are not so in name.  And as Coulson gathers a rather strange group of Avengers together we are given the hope we too can be Avengers (insert sappy music here).