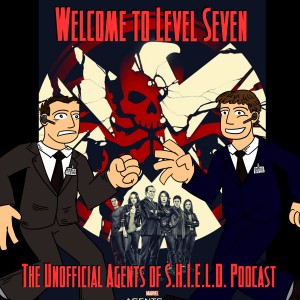 It's the season finale of Agents of S.H.I.E.L.D. with “Beginning of the End”! The uprising is over, and there is a new status quo! and we're ready to talk about it all!

This episode also marks the end of OUR season one! Next week we are starting our season two! Fifty episodes! One year! twenty-two fantastic episode of one great show! And a ton of awesome conversation and community! It's been great!

* Agents of S.H.I.E.L.D. has been renewed for another season! Also, a time change. It will now be in the 9:00 timeslot! Source: Marvel

* Agent Carter has been ordered! It will fill in for Agents of S.H.I.E.L.D. during the hiatus! Source: Marvel (same as above)

* Channing Tatum will be Gambit and may get a standalone movie. Source: Huffington Post

* Hugh Jackman MAY consider coming back to Wolverine. Source: ABC

* Cybertek offices? Why does this seemingly innocuous tag really matter? We;ll find out.

* Garrett is insane in the membrane!

* FitzSimmons are trapped on the bottom of the sea!

* Until they aren't. But poor Fitz!

* Coulson's team is the A-Team!

* Raina has no allegiance to Garrett, but she does want what he has.