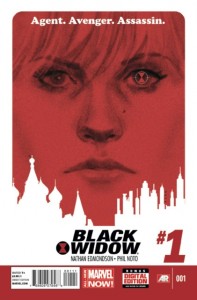 Black Widow #1 is part of the Marvel Now releases that are meant to be great jumping on points for new readers. So, does it work? Who is this book for?

Black Widow kills people. That much is known. But what else do people know about her? And who knows what? This issue explores Natasha Romanov's own thoughts about these mysteries, if not revealing the actual answers to the mysteries.

First thing first: this issue works as a jumping on point. Do you know nothing about Natasha/Black Widow? No problem, you'll be able to get into the read just fine. Do you only know about Natasha/Black Widow from the Avengers movies? You'll be just fine. In fact, it feels like it was written with that version of the character in mind. Are you a huge fan of the character? You'll be just fine, because this seems to be the start of a new status quo.

This book is divided into two missions. One mission introduces the character to us. The other mission is meant to be a clever twist on the idea of Black Widow as an assassin. In between the missions, we see that she has a “handler” of some sort, who handles her paperwork, money, and information gathering on her solo missions. Because here, she is working outside the parameters of SHIELD and the Avengers. She's on her own. You get the impression that she is “between gigs.” These missions are what she does on her time off.

And acting as an assassin, she has her own code. The self-imposed rules are not stated explicitly, but that adds a nice subtext to the story.

Unfortunately, while the story was clever, it was not enough to bring me back to the series.

The art, I have to add, was beautiful. And it was, surprisingly, not pin up material masquerading as a comic book. Phil Noto, the penciller, always bring a stylistic, yet realistic, style of art. (Full disclosure: Phil Noto drew the cover of a book I wrote.)

Unfortunately, in spite of the art, the story just didn't grab me. And I can't put my finger on why. It is a nice exploration of Natasha, but one problem is that everything that is revealed about her is then revealed to be a lie. Any look into her backstory turns out to be unreliable. And there is a strange conversation with a cat that starts as narration, turns into conversation, turns back into narration (so is she talking to the cat or to us?), and then she is talking to a spider. I felt like I missed something.

Anyway, I think it is the handling of the character itself that makes me feel like I won't be reading issue #2.

So, in conclusion: I liked the story and felt like it was a decent piece, worth the price of admission; I wasn't grabbed enough to come back though; I recommend this to fans of the character who want to follow her further adventures, but I'm not sure how much the casual fan will be interested.