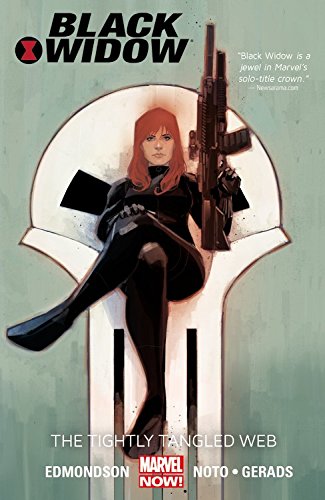 I will admit I was pleasantly surprised by Nathan Edmondson’s first crack at Black Widow.  So I was almost excited about Black Widow: The Tightly Tangled Web when I cracked the spine.  But, the book is completely mistitled.  So I present to you Edmondson and artist Phil Noto’s Black Widow Marvel Team-Up.

Black Widow is on the hunt for information about Chaos, a super-secret villain network.  Her global search leads her to team-up with numerous heroes including Punisher, Winter Soldier, and X-23 as she tracks the baddies.  But seemingly all her leads go cold and all she truly knows is Chaos has an agent within S.H.I.E.L.D..  Her problems today appear to be linked to some of her past misdeeds which included a confrontation with Hawkeye.  As the story ends the reader asks if Black Widow and those close to her like her lawyer Isaiah, and even her cat, are truly safe.  Because as the story ends reporter Anderson Cooper breaks to the world…an Avenger is a murderer!

After reading Winter Soldier: The Complete Collection I have become a giant fan of the Winter Soldier/Black Widow romance.  And to mangled a quote from the MCU Hawkeye when it comes to their romance, “You remember our decades together very differently.”  I love that the Winter Soldier is almost awkward in his interactions with Black Widow as he tries to protect her.  And I enjoyed that she cannot understand why Bucky is being so helpful.  And it makes me want them to be together even more.  I just love how the cold Winter Solider is incredibly sacrificial when interacting with her…and there is seemingly no benefit.  But he really cares!

One of the things that strikes me is how soft Phil Noto’s pencils are.  They are not dreamlike, but are forgive me feminine.   It really creates an interesting contrast between how “hard” the characters including guests like Punisher are to the softer lines that visually represents them.

The volume really does feel like Marvel Team-Up.  The connecting characters are Natasha and Isiah.  And they do a nice job of holding the volume together.  I am left with wanting to know more about Isiah and his limited client base.  And what does he have to do with organized crime?  Meanwhile Black Widow is an interesting hero with greyness that makes you wonder why she chooses some of her allies.  I also really found the X-23 team-up very interesting since I am sure Wolverine does not want these two ladies hanging out together, Natasha is a bad influence.

The Punisher team-up is very interesting.  As a reader we get to see the story from both perspectives.  They are clearly the same but different.

I find myself liking Black Widow after reading Black Widow: The Tightly Tangled Web.  It is a solid title that is fair to the character that we know, in multiple media, while also showcasing a strong female hero.  And I do really enjoy me some team-ups!