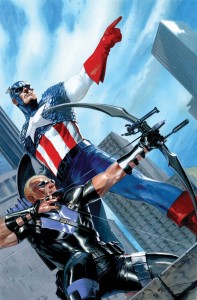 It is kind of a Buddy Picture! Yep, Captain America & Hawkeye written by Cullen Bunn and illustrated by Alessandro Vitti and Matteo Buffagni, compares the two Avengers with very different personalities. You have to ask, will these two very different men be able to survive their monsters.

Captain American and Hawkeye search for lost civilians in the New Mexico desert, the name Walter White is never mentioned. Their search leads them to the Damocles Research Facility, whose very aggressive security struggles briefly with the Avengers. Their investigation of the facility uncovers Stegron, a giant lizard villain with the power to resurrect the dead, attempting to restore a dead but great Saurian City. His attempt to revive the city leads to Hybrid monsters which use humans as hosts, including Captain America. As the hybrids attempt to overtake the facility, the two Avengers fight monsters and witness Zombiesaurs, yeah zombie dinosaurs!

Really the biggest take away from this collection is the relationship between Captain America and Hawkeye. Neither do things the same way. Captain America tends to think through options. But Hawkeye typically jumps into the action quickly, without thought almost. Captain America is a natural leader, but Hawkeye is not follower. He reminds Cap that he is not a sidekick. Really the story is about contrasting styles, which despite differences the two Avengers can overcome to both remain strong friends and an effective team-up.

If you want some adventure with zombie dinosaurs, Captain America & Hawkeye will probably fill the bill. But if you want something that is deep, beyond the action on the page, you may wish to move on. Other than contrasting Captain America and Hawkeye, this volume really only provides super hero action fun.