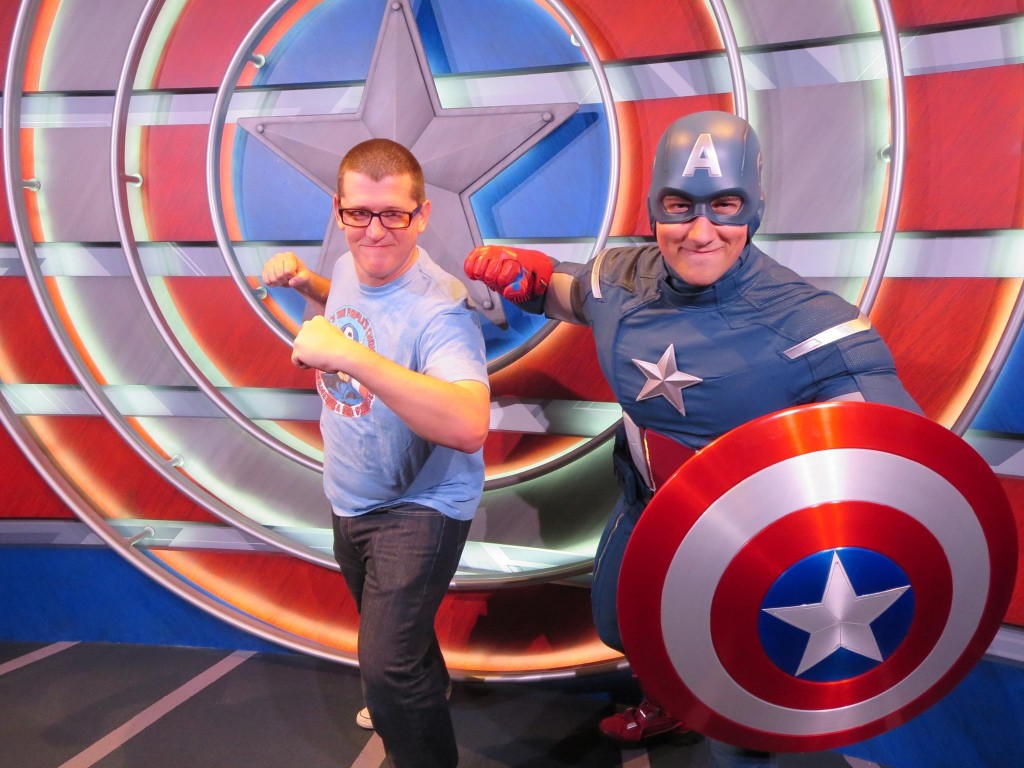 The following is the full trip report on meeting Captain America at Disneyland written by Charles Landy:

I made it over to Disneyland this past weekend to check out the new Captain America meet-and-greet in the Innoventions building. Annual Passholder previews were taking place before it opens wide on the 7th, so of course I had to sign up and get over there. My anticipation for Winter Soldier is already through the roof, so I couldn't pass up the chance. Long story short, I'm very glad I did. Here's how it went.

The Captain America meet-and-greet is set up in the same corner of Innoventions as the Iron Man and Thor attractions, and from my perspective, these new additions to what has been a tired old building for decades now are working perfectly to revitalize not only that space, but that whole corner of the park to boot. I know the integration of Marvel into the parks is still in its early stages (and not even wholeheartedly welcomed by more than a few diehard Disney fans), but Disney's apparent intentions of using their presence as the catalyst Tomorrowland desperately needs to get back on its feet again is really quite smart. It doesn't take much to envision the Innoventions building as the future site of an in-park Stark Expo, does it? We've seen the full-blown version of the Expo in ‘Iron Man 2' and ‘Captain America: The First Avenger' already, so I think Disneyland would be passing up a golden opportunity if they didn't at least try to bring something that has such close thematic similarities to Tomorrowland into the parks in such a perfect location. Marvel attractions, meet-and-greets, future movie tie-ins and promotions… the possibilities are absolutely limitless. Sure, I'd love to see a Stark Tower ride in the style of Tower of Terror happen someday soon too, but let's not get ahead of ourselves. I'm more than willing to let Toon Town get razed and replaced with Marvel Land in a completely natural and organic fashion. No rush.

Meeting Cap went surprisingly smoothly and quickly. I have no idea what it's going to look like once the general public is let in, so getting to take advantage of the AP preview was really such a privilege. We made our way up the ramp to the top level of Innoventions to show a cast member our Annual Passes and a confirmation receipt, waited a few minutes, and were then let into the roped-off area containing the new meet-and-greet. It's just to the left of Iron Man Tech, and although the new allotted area is small, it keeps things quick, simple and to the point. You make your way through a short line and up a ramp, and before you know it, you're face-to-face with the First Avenger himself. The queue itself is short, but Imagineering has packed it with an impressive amount of coolness to keep you occupied. Lots of facts and figures about Cap line the walls – his history, when he was inducted into S.H.I.E.L.D., how much he can bench-press, all the important stuff. There's even a life-size lenticular hanging on the wall to remind you of the difference between pre-super serum Steve Rogers and his more inflated self, and right before you step in to meet Cap, there's an authentic movie-used costume from ‘Captain America: The First Avenger' sitting in a display case. It's the WWII outfit he wore to break the Howling Commandos out of prison, and man is it ever cool. Right down to the girl's helmet! Easily my favorite movie Cap outfit to date.

And then, there you are. You step into a fairly large room at the back of the exhibit that's decorated somewhat like the set of The Colbert Report, and the man himself is standing front and center ready to greet you. Holy crap, it's Cap! I know full well that I am an adult who really shouldn't get so excited to meet a paid actor playing a role in a theme park, but man, I couldn't help it. I could feel my face beaming with happiness as Cap strode over to snap me a smart salute and welcome me to his new hangout. ‘You ready to give 'em a salute, soldier?' Hell yes I was. I handed the PhotoPass cast member across the room my camera and my Annual Pass to record my photos on, took my place on Cap's right side, and took a few pictures saluting with the biggest, goofiest grin on my face. I could barely help it. I figured it would be a one-and-done with the line outside getting longer by the minute, but oh no. Not at all. Cap asked me my name and asked me if I wanted to get one more pose in with him. We crouched menacingly with our fists held high and the exact same facial expression on our faces, and although he was the only one in the cool costume (excellent work by the WDI costume department on this one, by the way), for a fleeting moment I was Captain America too. It was, to put it lightly, awesome. Hell, I even got to take a selfie with him. Just too damn cool from beginning to end.

And with that, it was over. He thanked me for coming, told me I was an honorary Avenger, snapped me another salute and sent me on my way. I couldn't stop smiling. Hell, I barely remember making it back to the car. Sure, it's little more than a stylized meet-and-greet, but for Cap fans like myself, it's a dream come true. The actor playing Cap was really cool and genuinely into playing the character, as well. He was clearly taking it seriously, but still managing to have fun with it both for himself and for everyone involved. He was always ready with a new pose or a joke or just something cool to say as he interacted with you. I know Cap can't get drunk, but I wouldn't mind buying that guy a beer if I ever see him around. Maybe in Dum Dum Dugan's pub over in Marvel Land once it opens.

In short, I highly recommend getting over to the park double quick to check it out before the crowds make it too impossible. I wasn't the youngest guy there by a long shot, but I certainly wasn't the oldest either. Men older than me holding vintage comics for Cap to sign were all around me in line, and kids of every age in Cap t-shirts and sweatshirts of every design filled in the spaces between us. (I had my ‘Captain America For President!' shirt on, naturally.) The appreciation of a good show spans generations, and that is exactly what this little corner of Innoventions provided me with for a few magical minutes. Hey, it's Disneyland. I expected nothing less.

Hanging a noose on the goose-stepping goons from Berlin,