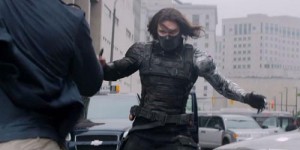 “My character's name is in the title…and this movie's STILL not about me!”

I love this movie. I love it so much.

It is exciting. The characters are compelling. The twists are mostly unexpected (except for Senator Robert Redford…I mean who thought he was a good guy, am I right?). The stakes are high. The action is visceral.

But this is a movie about heroes. What is a hero?

Sitwell? Not a hero. He bent with the wind.

Steve Rogers? A hero. He knows the right thing to do and wants to not only do it, but inspire others to do the same.

Falcon? A hero. Even in situations over his pay grade, he will stand with Cap and fight for what's right.

The little guys? Heroes. Agents of S.H.I.E.L.D. who realize what's happening, who hear Cap tell them it's all hitting the fan. The stand against the tide of evil getting ready to wash over them. They stand with guns to their heads. They try to stop the evil, even if they have no hope of surviving.

I'm not saying we're all called to throw ourselves in front of the speeding bullets. But this movie is a movie that should inspire us to stand firm when evil is closing in.

So I appreciate the action, the Marvel name dropping, the jokes. But I also love the themes and the deeper meaning. Of all the Marvel movies, I feel like this one has the most staying power as an exciting action movie with some rich themes.

Previous episode: End of the Beginning