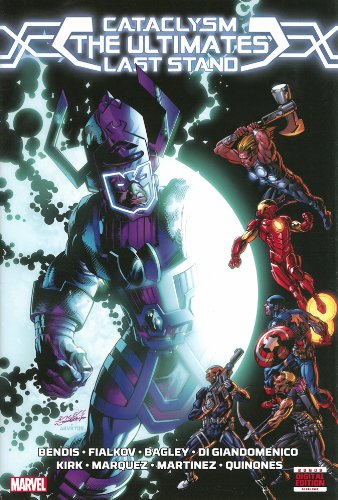 The rumor was that Galactus might eat the Earth of Marvel’s Ultimate universe.  Well, he did not. In Cataclysm: The Ultimates Last Stand, Galactus does leave a deep scar on the Ultimate universe and plenty of unanswered questions.  But as we see with continuing titles, Galactus failed to get a full meal!

The boundaries between the Marvel universes has weakened due to the numerous recent time and multi-dimensional events.  The Marvel 616 Galactus finds a path into a new to him universe, the Ultimate universe, and hungers for energy.  He bonds with his Ultimate doppelganger, the robotic Gah Lak Tus swarm, to form an even hungrier and deadlier version of himself and targets Earth to sate his appetite.  His appearance leads the heroes and villains of the Ultimate universe to unite to fight an unbeatable foe.  Heroes are made while others fall.  In additional stories, a new version of the Ultimates, the Avenger doppelganger, is formed, Nick Fury battles a Gah Lak Tus cult lead by M.O.D.O.K., and the X-Men struggled with their role in a world that has hated them on the verge of extinction.

Somebody has to pay, and it could be S.H.I.E.L.D..  In the end, S.H.I.E.L.D. under Director Chang is charged with ensuring the safety of the Earth from all sorts of global-level threats.  And S.H.I.E.L.D. in the Ulitmate Universe seems to go from crisis to crisis event, with them only getting bigger and bigger.  So despite the fact that no one can really prepare for a Galactus event, especially since your Gah Lak Tus is a machine not a giant purple man.  Yet the fact that the world has experienced massive casualties means there will be repercussions for S.H.I.E.L.D..

I have really liked the use of the Gah Lak Tus swarm in the Ultimate universe.  And this story gives us more background on the swarm, including origin.  It would be good MCUing of Galactus, though that’s not allowed thanks to contracts.  I think Gah Lak Tus is scary as it is and we really do not need old big purple to make this a scary threat.  In many ways seeing the 616 Galactus in the Ultimate Universe is a little strange since this is the universe of Gah Lak Tus.  And you do get the sense that the combined version of Galactus are pretty dang scary!

Reed Richards, the villain, visits the 616 and learns what could have been!  It is poignant and shows how easily a hero can become a villain.

S.H.I.E.L.D.’s Ultimates take some pretty big loses in this story.  And as future titles show, Jessica Drew sets up the new younger and cooler version of this team.  I think it is a good financial move for Marvel to add Miles Morales to the Ultimates.  It will surely help sell books.  And I like the idea of Drew as leader since this clone of the Ultimate Peter Parker is one of the most interesting Ultimate characters out there for my money.  So as the Marvel 616 gets a new Cap and Thor, the Ultimate universe is experiencing a minor reset.  And this reveal does see the addition of the Ultimate version of a Jack Kirby designed hero and a very important S.H.I.EL.D. agent.

This story collects all the Ultimate titles and the related mini-series.  I really wish they had organized the book differently though.  They present each title together.  So we get Hunger, and Cataclysm, and then the Ultimates issues and etc.  I really did like having all the pieces together but by the time I got to the X-Men issues I felt no tension since I already knew how the event would end.  So I think there could have been a little different and better ordering between the covers.  For example, make the end…the end.

Joshua Hale Fialkov and Brian Michael Bendis offer us Cataclysm: The Ultimates Last Stand.  Like other Ultimate events it is big, heroes are lost and the world is in the shambles.  So it basically is another Ultimate event, not the end of a universe.

Maybe we will review some more Ultimates around here, because there really is a strong tie to the Marvel Cinematic Universe S.H.I.E.L.D..