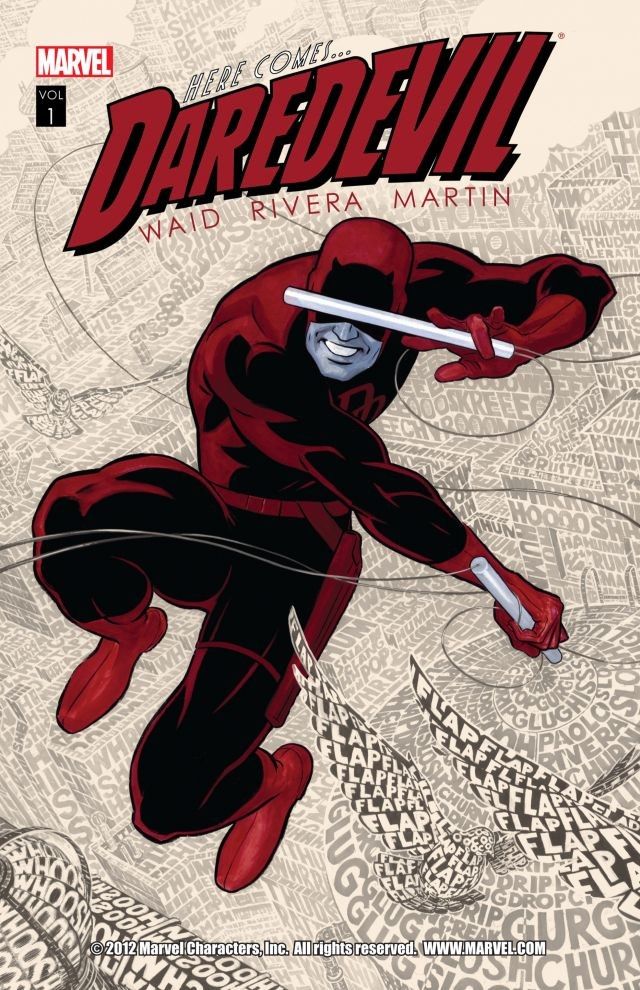 Maybe a third time is a charm.  I promise I really want to like Daredevil, but I am starting to believe I don’t like lawyer superheroes.  So here we go, let Agent Daniel try again with Daredevil by Mark Waid Vol. 1.  Seriously, I have been told it is good.

As the volume opens, Daredevil crashes a wedding…a mob wedding!   After he gives his regards to the bride, the reader gets glimpses of Matt Murdock’s world.  During the day, Murdock and partner Foggy Nelson defend the little guy in court.  But with rumors that Murdock is Daredevil swirling, their law practice suffers.  Even a judge suggests to a Muslim shop owner suing the New York Police Department for brutality, that his counsel is doing him no favors.  The two lawyers low on clients start a new practice type.  They consult clients who defend themselves.  Of course each of these clients cannot find a lawyer for a reason, which leads Murdock’s other identity Daredevil to defend the clients outside of court from super villains and super crime.

To be blunt, some of the legal maneuvers in this volume are questionable.  First, in Matt’s first case of the book opposing counsel makes a very large deal out of Daredevil since many people assume that Murdock is Daredevil.  But it is excessive.  When checking in with a legal minded Agent I was advised that unless there was a question of the client being Daredevil, which he is not, then a good judge would have quickly shut down this line of reasoning.  Now it is Daredevil that makes Matt ineffective as a lawyer, not his actual skill.  So it is a story reason on why Matt can’t represent client not really a reality reason.  Second, our agent does point out that self-defense is a really bad idea.  Now Waid does make it clear that the self-defenders cannot get lawyers either because of questionable cases or good old intimidation.  But really these clients need a lawyer.

Foggy Nelson is useful!  Foggy Nelson is smart!  Who knew?  Waid sets up Nelson as having encyclopedic knowledge of case law.  I would love it if Netflix could retain this aspect of Foggy’s life.  It would be nice if he had some usefulness to the story beyond being comedy relief.

Okay, I have to admit it, I liked this volume.  But what I liked was not the Daredevil parts.  What I liked was the Matt Murdock lawyer parts, even if the unbelievable moments.  I really found myself attracted to the parts of the story that highlighted his interactions with clients.  And it was kind of fun spending time with him as he prepped clients for the court room.  It was a really nice change of pace that I enjoyed.  And like the Foggy growth I would like to see Netflix leave this personal element in their series.

Captain America shows up as America’s top cop (I assume S.H.I.E.L.D.) to make Daredevil pay for actions he took part in when he was possessed by a demon?  But after he agrees to quit harassing Matt, he disappears.  I really do not understand yet why this plot line was abandoned.  I liked the idea that Cap was trying to make everyone pay for their actions, even while possessed, because something similar happened to Bucky.  Again, I just wish this could have been explored in greater depth.

There we go agents, a Daredevil book that I liked.  Ironically, it was not because of the Daredevil elements of the story!  But it is enough to say this is a Daredevil I enjoyed and am willing to go deeper into as long as he retains interesting clients!