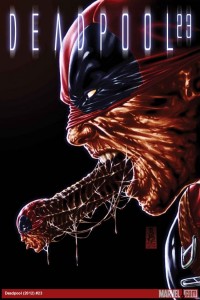 I love the number 23.  My favorite baseball player, the other number 23 in Chicago, wore those digits.  So as I went to my local comic shop to pick up Deadpool #23 I was in a chipper mood.  But after I gave the cover a glance, triple checked to verify it was the book I was looking for, and then laid down my cash I had left the LCS a little peeved.  Seriously, I know that Deadpool appears on tons of covers of stories he has nothing to do with but why mess with a classic and not put something SHIELDy (did you see what I did there) and humorous on #23?

Deadpool is hot on the trail of his money and Agent Gorman.  Deadpool with the aid of Agents Coulson and Adsit infiltrates the stolen U.L.T.I.M.A.T.U.M helicarrier and engages the terrorist henchmen.  While Deadpool chases Gorman, our man Phil awaits his return so they can finally retrieve Agent Preston from Deadpool's mind.  But being Deadpool, it is possible that everything does not go to plan!

Deadpool was winning me over but this cover is killing me.  I literally cannot get past it.  My expectation was like the last two something funny and S.H.I.E.L.D. related.  Instead, what is this an homage to Alien.  Deadpool should be in the Alien franchise so he can right the ship.  Deadpool does not need Alien!  Recently I heard comic great Neal Adams say a cover can either be iconic or it can further the story.  Now, I get it they are looking for iconic here.  But I thought Deadpool #21 was both iconic and furthered the story.  Here is the deal, I am not a fan of scary gross and that is what this cover feels like to me.  I wish they had printed it as a B cover instead of making it the official cover.

Deadpool needs a digital code!  Maybe that can be solved by the All-New Marvel NOW!!

Oh henchmen!  You have hard choices!  In this issue we see two henchmen discussing the hard choices between Hydra, U.L.T.I.M.A.T.U.M, and the service industry!  And do you know how hard it is to tell who is who when you all wear the same mask?  And honestly the most poignant moment of the book is not Deadpool dealing with the emotional scars of his deceased daughter maybe being alive, no it is a henchman phone call home that got my attention.  Yes, henchmen are people too!  Maybe they need a union.

Yeah, Coulson is great.  He worries so taxpayers like you, your parents and me do not have to.  But he is also developing an Agent Ben opinion of the merc with a mouth!

Deadpool #23 you are my favorite number.  But you were not my favorite issue.  Maybe the cover really did set me up to not like the book.  Hey, it's a personal choice and maybe some of you will like the book because of the cover.  I know that Guardians of the Galaxy #1 worked okay for me thanks to a Deadpool variant cover!  So for you this could be your cup of tea!