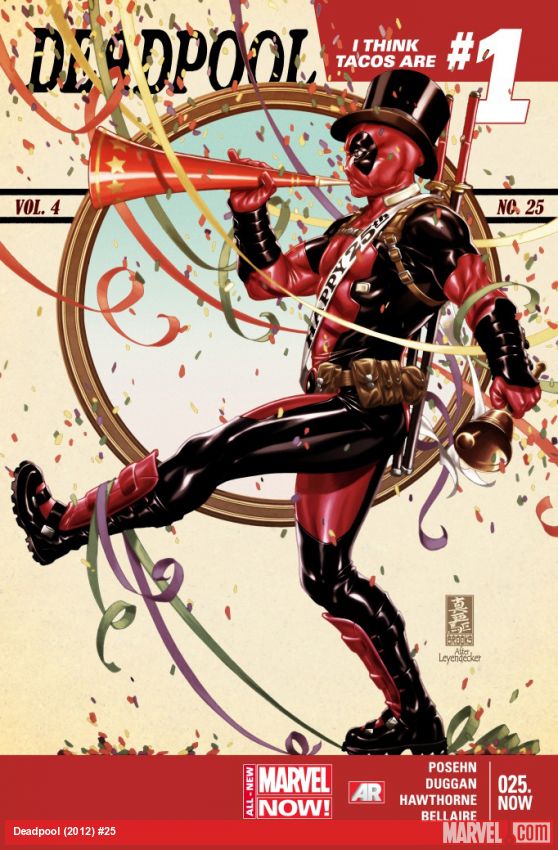 Deadpool joins the All-New Marvel NOW!  So clearly anyone can jump on board now, right.  Seriously, that’s the point of this non-reboot reboot right.  Deadpool 25.NOW is the perfect time for anyone to jump into Wade Wilson’s personal adventure!

There is some confusion about the more violent Agent Preston inside Deadpool’s head.  For months she has served as the voice of reason within Deadpool’s head.  And now all the sudden she wants to fight all comers!  The good news is the story does wrap up for the readers what is going on so you can understand why Preston has gotten so aggressive.

I really wonder, did Marvel force the All-New Marvel NOW! label on this issue.  It is really the end of an arc.  And the whole story with Agent Preston really started two years ago.  This is not a jumping on point.  I would have a hard time believing that anyone would think this is the beginning of anything.  I really wish they had waited a month to launch Deadpool under the All-New Marvle NOW! with time traveling Hitler.  Yeah, that is a new thing for the title.  Or maybe Marvel should have waited for Deadpool’s wedding.  Honestly, this could be the last comic file involving the Merc with the Mouth since S.H.I.E.L.D. appears to be done with our hot mess of a friend.  But then that next S.H.I.E.L.D. free issue would have made a much better jumping on point than this one.

Still no digital code in the Deadpool of All-New Marvel NOW!!  I am guessing it is the $2.99 price point that is keeping the code from being included.