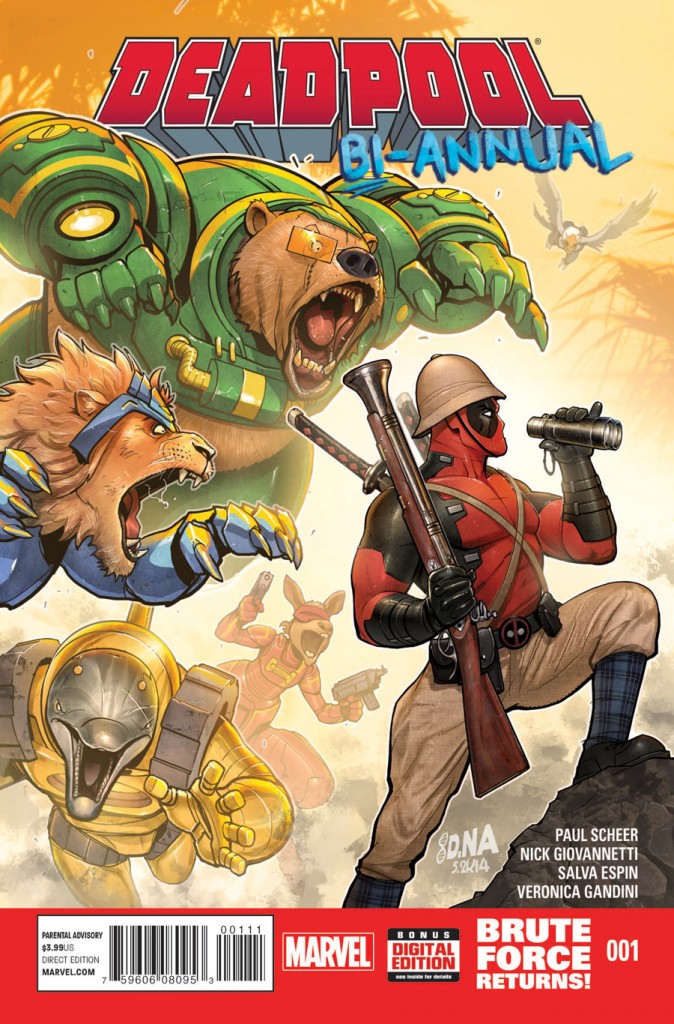 Preamble
Maybe I should just start reviewing every issue of Deadpool.  Sure Agent Ben would hate every minute of it.  He would fight the trend.  But he has to admit that Deadpool is really Coulson’s second regular title.  And with Paul Scheer, from The League, co-writing Deadpool Bi-Annual #1, one knew the funny was coming.  But a Coulson/Deadpool team-up!  Now that is something that even Agent Ben has to agree too!

Deadpool, contractor of S.H.I.E.L.D., opens this issue with a quick attack on a Hydra base in Salt Lake City.  But between official jobs, Deadpool is contracted by Water World to take out, or unalive, a terrorist group called Brute Force.  Brute Force is a group of intelligent animals who can also transform into cars, yet were never a commercial success.  Brute Force attacked the Water World theme parks to liberate their animal brothers and sisters from the evil clutches of the theme park giant.  As Deadpool engages Brute Force he comes to question if he is on the right side.  And Agent Coulson is called in to advise Deadpool on making good choices.

Agent Ben may disagree, but how can he since he has not read it, but Deadpool Bi-Annual #1 is a must read for Marvel Cinematic Universe fans.  In the opening mission, Scheer and co-writer Nick Giovannetti make it clear that they have seen the MCU movies.  And for those who know, well you will be rolling as Deadpool jumps into his mission.  They make sure to cross-over onto Tuesday nights, in a scene with Coulson that made me stomp my foot as they took on a classic Agents’ moment.  Yes, Deadpool has crossed over with Coulson and it is our Coulson.  And for the comic fans, Deadpool quotes Captain America, showing he understands the Avengers plan.

Brute Force is an interesting guest star.  They are a creation of the 90s, and they open the door to plenty of 1980s and 1990s reference.  Yes, it was a time where men were men and robots combined into even bigger robots.  And for my tastes, there is a reference to my favorite television show of the 1980s. The really ironic thing is I have never read anything about Brute Force, but Agent Ben has and wants to read more.  But to read about this Dolphin, Eagle, Kangaroo and Lion with a heart of robotic metal he has to open a Deadpool story!

As a theme park fan this story is ripped from today’s headlines.  Water World is clearly a stand-in for Sea World.  Water World has San Diego, San Antonio and Orlando based parks.  So it is pretty obvious.  And they keep making mention of a documentary which puts Water World in a bad light in how they treat the animals.  And this is clearly a parallel to the real life Blackfish documentary.  I did enjoy Deadpool fighty fighty within a theme park, breaking the attractions and causing millions of dollars in damages!  I am just glad I was not touring that day.

Artist Salva Espin offers us a montage that initially makes no sense in the first read.  After the story plays out I suggest jumping back and looking at it again.  It will all make sense!

I love Deadpool Bi-Annual #1!  I has ties to the MCU, fighty fighty in a theme park and theme songs running in my mind!  It is delightful fun which includes a Coulson team-up written right!  I suggest grabbing a copy; just do not share it with the kids!