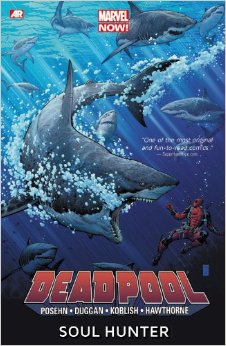 Guess what Agent Ben, Deadpool’s back! Yes, the merc with a mouth is hanging out yet again with some of S.H.I.E.L.D.’s finest in Deadpool: Soul Hunter by Gerry Duggan and Brian Posehn with illustrations by Scott Koblish and Mike Hawthorne. Being a Deadpool book, Deadpool: Soul Hunter is far from the high and tight book that Nick Fury would enjoy! But it is fun!

As the volume opens the reader zooms back to 1981 (before Deadpool made his debut) and an “inventory story” that was lost in the Marvel archives. Deadpool is contracted by a minor demon to get Iron Man drinking again. He angers the demon when Deadpool decides on his own terms how the contract will be fulfilled. After this pick up issue, we enter Deadpool’s current problems. S.H.I.E.L.D. has stiffed him on his fee and the late Agent Preston is sharing his body. As he attempts to free Preston, he is approached by the demon Vetis, yeah the same demon from the 1980’s,. Vetis states that he will reap the souls of the Necromancer Michael, the guy who recently raised America’s dead presidents from the grave, and Deadpool unless he collects four other souls who had struck contracts with him. Deadpool has to balance Vetis’ predictable betrayal, getting Agent Preston out of his head, and keeping Michael alive. And of course, Benjamin Franklin continues to serve as a spiritual consultant to our anti-hero.

Deadpool: Soul Hunter is funny, lewd and full of plenty of gore! It is everything that Agent Ben would hate. Ben, there is a Squirrel Girl reference. Please just look over the fact that it’s tied to a lewd joke! Deadpool really is not for everyone. There is a ton of adult humor and it only feels like it is being ratcheted up in this book. Basically, it’s not for kids agents!

S.H.I.E.L.D. is primarily represented by Preston. And she is very by the book and at times prudish. The agent serves as a nice contrast to Deadpool, being both female and rationale. It has to be weird for Deadpool, talking to himself and the responding voice being full of common sense. Preston also takes on a motherly role for Deadpool. You actually feel that she is shocked but also concerned with Deadpool and all of his emotional scars.

To increase his power in hell, Vetis needs Deadpool to collect the souls of those who signed contracts to him for super abilities. One of my favorites is the lifeguard that can breathe underwater and control the actions of sea animals. Of course as an Aquaman fan I was both overjoyed and disgusted. The anger came from the mocking of the sea king, but I will admit I can handle a tongue in cheek examination of Aquaman. There is a lot going on in this volume, but it is really the collection of these four souls that the story is built around.

Yeah, this book is a hot mess! Seriously, there are scenes in hell. If you like Deadpool, you will likely enjoy Deadpool: Soul Hunter. If you are Agent Ben, just keep on walking by. This is book is typical Deadpool fun and it promises to be followed up with secrets revealed in Deadpool’s past and plenty of more S.H.I.E.L.D. hijinx!