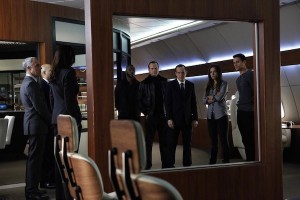 Only missing Fury and Romanov…
But not Barton.

END OF THE BEGINNING

This is the one. The episode leading up to Captain America: The Winter Soldier.

An conspiracy is rising. We knew Winter Soldier would deal with that, but had no idea what the scope of things would be.

This does feel like a chapter in a larger story, now.

So much happens in this story:

* Blake helped before getting smashed by Peterson.

Good, good, stuff. And it sure does make me excited for the Captain America: The Winter Soldier movie.

We complained that there was no One Shot to include in the Captain America: The Winter Soldier Blu-ray…

THIS is the one shot! It just happens to be a a bunch of twenty-two 42-minute chapters long one shot!