Who are the Agents of SHIELD? Well, Marvel has released another video with Level Seven access, so we have another entry in the Personnel Files!

This time the subject is the scientist/geek team of Fitz and Simmons, played by Iain De Caestecker & Elizabeth Henstridge. Watch the video, then continue reading for some more information:

The video does not reveal much more than we already knew. Leo Fitz and Jemma Simmons are good at their jobs, and enjoy doing their jobs. The official description of their characters back when they were casted said: “Their sibling-like relationship is reinforced by their shared nerd tendencies.”

In this “brother/sister” team, Fitz is a tech whiz and Simmons is a biology expert. Judging from the video, they seem to be where a lot of the comedy will come from.

As for the actors, like Brett Dalton, both Iain De Caestecker and Elizabeth Henstridge are at the beginning of their careers, and they are coming out of the gate, so to speak, with a HUGE project.

Also of note, apparently in his first trip to Los Angeles he landed the Leo Fitz role. 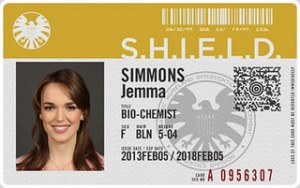 Elizabeth Henstridge has only a few roles on her list of credits, too, although, again, it should be noted that her career only started in 2010. She's also in the upcoming movie Reach Me starring Sylvester Stallone.

For both of them, this is a break out role and a fantastic way to start their career.