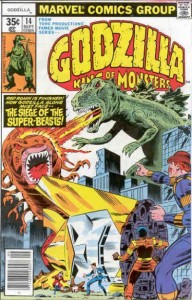 But more than that, S.H.I.E.L.D. is hot on his tail! Could it be? Godzilla 1954 was actually the first MCU movie? Okay, let's not go that far. But does the mixing of two franchises work?

(This review is based on the Marvel Essential edition of Godzilla: King of the Monsters.)

In the Marvel universe, Godzilla is very, very real. And while some of those movie events in the fifties and sixties occurred, they were in the past. 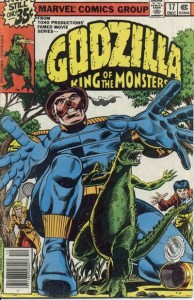 Now, in the present, he's back. And he's kinda angry. Well, miffed, anyway. He's a monster. Not a protector of mankind, as he was in the movies of the time. He's a beast. A force of nature. A very smart force of nature. And when he rises in Alaska and begins his march across America, through Vegas and into New York, S.H.I.E.L.D. is on the case. Specifically, Dum Dum Dugan, Gabe Jones, and Jimmy Woo, along with some scientists and other supporting cast.

Through the course of adventures, the Fanastic Four gets involved with trying to solve the Big G problem; a giant robot called Red Ronin is created to battle the beast; the Champions battle the monster, including Hercules going toe to toe (literally) with Godzilla, and Black Widow getting in on the action; Godzilla shrinks down to man size and has a fist fight with Dum Dum Dugan; shrinks down even further and enters the New York sewer system, a classic Marvel local is there ever was one; goes back in time, still in his smaller size, to battle Devil Dinosaur; and when Godzilla returns to the present day the Avengers show up toward the end.

But not much crazier than any Marvel comic of that time. 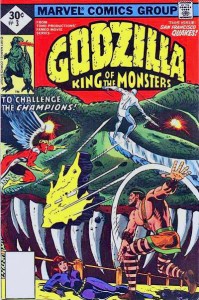 Also, the Champions show up. The Champions is a weird book from the seventies that featured Angel and Ice Man, two of the original members of the X-Men. The original five are my favorite X-Men, and Angel is my favorite of the five. Seeing him here is fun.

But Black Widow also appears! AND HERCULES!!! Hercules vs. Godzilla? That could be epic!

It wasn't. But it COULD have been!

Something else I appreciate: the story actually gets an end, as the license had an end date. They knew how long it would last, knew when the end was coming. And the ending feels like a Godzilla movie.

Which brings me to the next thing: does this mixing of franchise work?

It's not without precedence. Marvel took classic literature characters and ideas and mixed them into the Marvel universe with Dracula, Frankenstein, and War of the Worlds.

Godzilla: King of the Monsters works just like that. Godzilla as a monster is not out of place. There are numerous monsters in the Marvel universe. Why not Godzilla? The stories the Big G is dropped into also fit into the Marvel comics style of the time. It could have just as easily been Fin Fang Foom. 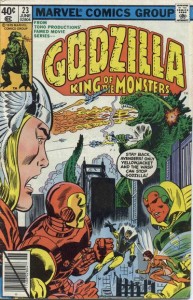 I'm a fan of the Big G, but you don't HAVE to be. This series gives a nice cross section of the Marvel Universe at that period of time, and does so under the guise of a Kaiju movie. 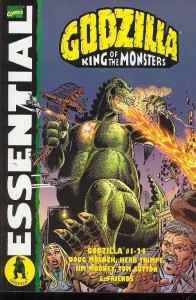 (Purchasing anything — not just the book we're linking to — after clicking on the Amazon link supports the podcast! And you don't pay anything above the Amazon list price!)