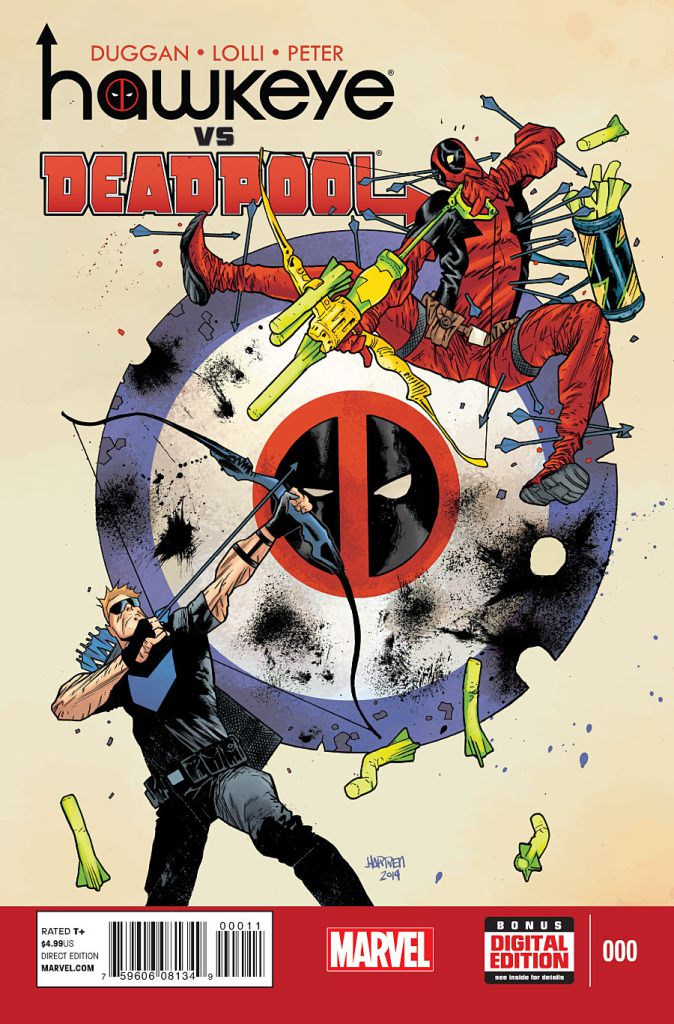 Preamble
I really dug the Hawkeye/Deadpool lovefest of Secret Avengers 7.  It was really fun and it showed how good these two funny heroes can be working together.  So when I stumbled, yes stumbled, on Hawkeye vs. Deadpool 0 and saw it was written by Gerry Duggan, well it was an instant Comic File.

It is Halloween and a guy name Jeremy has done some bad things.  He had done the sort of things that can get you shot!  So he grabs his flash drive and goes looking for help.  Meanwhile, a lot of kids are disappointed by Hawkeye on Halloween.  And this includes those kids trick-or-treating with Deadpool and his friend Agent Preston.  Jeremy ties to give his flash drive toHawkeye, but he passes it to Deadpool instead.  The punny heroes then team-up against thugs in Punisher and Daredevil costumes.  After a lot of fighty fighty, our heroes discover what is on the flash drive, it might just matter to S.H.I.E.L.D., and readers can assume that we are now setup for a new team-up limited series.

Hey, Hawkeye is deaf?  Who knew?  I did not know.  He can read lips and has a hearing aid.  But probably the coolest part of this development is the use of American Sign Language.  Artist Matteo Lolli does a great job of incorporating sign language in his images, including showing motion so potentially one could learn…yes one could learn in a Deadpool book.  Somewhere Agent Ben is shaking his head.

Another thing that Lolli does incorporate is David Aja style art.  These include images that will remind you of pizza dog, who makes an appearance.  But Lolli does not wholesale copy Aja’s style.  No, he sprinkles it in beside his own artistic flair.  So a reader of Hawkeye will feel comfortable.  But it is not so much that a general reader will feel left out.  And it is used really well.

Gerry Duggan is one of my favorite Deadpool writers.  Now, I admit I expected a little bit more of the funny than we get.  And I am not up to date on the current Deadpool title, so this series resolved a long-term storyline for me…one that was resolved in the monthly title.   Now do not get me wrong, there is plenty of funny in here which includes a typical childhood Halloween concern,Hawkeye’s costume for answering his door (quite surprising), and Deadpool’s explanation of the action is humorous.

Daniel, “Can you start throwing that Hawkeye vs. Deadpool title into my pile?”

What sealed the deal?  Well as a S.H.I.E.L.D. fan I need to keep track of Jeremy’s flash drive.  And the fact that Deadpool is teaming up with Hawkeye does not hurt one bit!