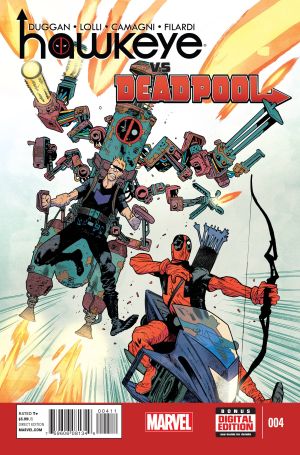 Preamble
It is time to say goodbye to Gerry Duggan’s Hawkeye vs Deadpool with issue number 4.  I had high hopes for this series featuring my favorite security organization S.H.I.E.L.D., my favorite punny archer and my favorite Merc with a Mouth.  So as the final issue rolls in, it is time to ask if the series won me over.

Situation Report
Black Cat’s drones, including Hawkeye, are freed.  The Hawkeyes have to stop Black Cat from getting S.H.I.E.L.D.’s personal information into the cloud.  Though we should not worry too much because Deadpool has decided that the story needs a third Hawkeye in this team-up!  Can the Hawkeye’s save the day through fighty fighty?  Will Black Cat be brought to the Dawn of Justice?  All these questions and more are answered.

Level Seven Analysis
I am going to use this time to speak about both the issue and the entire series for those who have not read it and might think about picking it up in a future trade.

I was really expecting this series to be a constant pun and gag fest.  The concept of Hawkeye and Deadpool working off each other is really brilliant.  Then putting Gerry Duggan in charge, who in my mind is probably the best Deadpool writer around, is my idea of plussing an idea.  So I was shocked he chose to not go for all the obvious laughs.  The story is amusing with some belly laughs, but it does not go over the top.  Perhaps it was the fact he was writing an Avenger that lead to some restraint.  If anything this is a Deadpool story that Agent Ben would read, without the Great Lakes Avengers, because Deadpool does not get totally out of hand especially in the grossness area.

The real star of this whole series in my eyes is really Kate Bishop.  Deadpool and Hawkeye really do not learn anything from their team-up, unless you count using Hawkeye’s toys with style.  But it is Kate who learns to look behind Deadpool’s rough exterior and see something both fun and heartfelt under Deadpool’s red tights.  And she also learns about herself as Deadpool shows her how to use some really “fun” weapons.  Also she shined as the adult of the story for much of the series as she kept the boys on track.

Clint Barton also gets some heartfelt moments.  But they might be more tied to regrets than lesson learning.  You get the sense that Clint believes that everything is his fault in the end, even if Kate and Wade stay by his side.  He is the one who gets brainwashed.  He is the one who worked for Black Cat.  And in the end he feels like if he had just answered his door on Halloween a man would still be alive and this whole thing would have never happened.  However me, I think I will hold the villains of the tale responsible.

Duggan really does write a great Deadpool.  And one of the things he does really well is show a Deadpool that we can relate to, along with the funny.  One leaves the series fully understanding Deadpool’s reason for the team-up.  If you cannot relate to Deadpool in some points of this story, you might have no soul!

I have made the joke a few times that the story feels like Mission Impossible without Tom Cruise, unless Barton is Cruise.  Though I will admit that the story works and provides a great motivation for Deadpool staying engaged in the caper.  So despite me pointing out what I have seen as a cinematic connection, it really does work in the end.

Conclusion
In conclusion, I enjoyed Hawkeye vs Deadpool. It was a nice story of two Hawkeyes and one Not Hawkeye.  The story had plenty of action, some laughs and heart.  But it was not really what I expected.  Deadpool fans and Hawkeye fans will find this story a must.  But for the MCU fan, S.H.I.E.L.D. is probably where you would want to direct your $3.99.