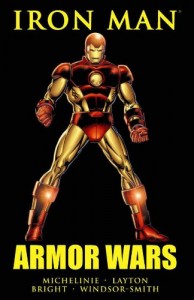 While researching the armor warn by the former villain Force, Tony Stark finds his technology being used in the suit. He discovers that his nemesis Justin Hammer had Spymaster steal his intellectual property and sold it to villains for their own use. Burdened by the weight of the deaths that his stolen technology has caused, he starts a crusade against all armored figures who may be using his designs. As Iron Man, Stark stands against both good and bad guys to neutralize suits based on his ideas. This crusade sees him standing against not only villains like Titanium Man but also the United States government, S.H.I.E.L.D. and his friend Captain America. What will the repercussions of this Armor War be for Tony Stark and Iron Man?

It is Tony Stark and Iron Man we can learn the most about in this story. First of all, Iron Man’s eye and mouth slits were open. He actually has to drop Plexiglas shields to go under water. Okay, it is really not that important but I found it weird. I have gotten really used to an enclosed system to see an Iron Man where you actually can peek into the mouth. Second, Tony Stark has to fire Iron Man from Stark Industries because of the Armor Wars. I really do not know who he is fooling other than the public, because as Hawkeye points out the Avengers know who Iron Man is. No they are not chasing down Randall Pierce, the false name Tony hands out for Iron Man. No, this is Tony Stark and if consequences are handed out by the Avengers, well they know his address. So who is he fooling, other than Nick Fury!

Probably the most shocking moment in this book is the battle between Iron Man and Captain America. Part of Stark’s crusade is to neutralize armor he made for others like the United States government. So one of his targets is the super villain prison The Vault. The prison is guarded by armored sentries The Guardsmen. Steve Rodgers fired as Captain America and currently sporting the black uniform that will become The Captain, takes a stand against Iron Man in this assault. The fallout from this battle is not fully explored in this arc, but it does precede the Civil War arc years later where Captain American and Iron Man would be on different sides.

Of course we have to mention Tony Stark versus S.H.I.E.L.D. . One of Stark’s targets is the Mandroids he made for S.H.I.E.L.D.. He actually runs an elaborate con game against Nick Fury to get him to place these suits in a location where he could more easily dispose of them. I will not reveal the outcome. But it is clear that Nick Fury has become suspicious of Tony Stark’s involvement in the incident. It is also clear that though the Avengers may know Iron Man’s identity, Fury does not!

Personally, I believe that Iron Man: Armor Wars is an important story arc. It reveals a lot about Tony Stark from his inability to share his intellectual property and the drastic action he will take to keep control. Honestly, this story makes Stark’s actions towards Rhodey in Iron Man 2 and Iron Man 3 around access to armor feel completely in character. Armor is not something that Tony gives out as a gift. The Armor Wars is one of the first stories I think of when I am asked a good story about the comic book Iron Man!