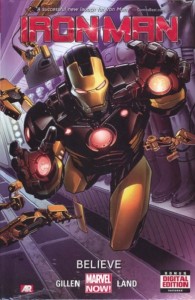 Iron Man: Believe written by Kieron Gillen and illustrated by Greg Land collects the first five issues of the renumbered Iron Man under the NOW! relaunch. Fans will likely be interested in how this restart builds on the storyline of the former Invincible Iron Man series and the Marvel Cinematic Universe. As someone who had read the Matt Fraction issues of this series, I wondered if the NOW! Iron Man would feel refreshed and new.

Tony Stark receives a message from Maya Hansen that she has been forced to reconstruct her Extremis process for A.I.M.. The message also notifies Stark of Hansen’s death. Stark worried about Hansen’s technology being used for evil purposes decides he must preserve his friend’s legacy by finding and destroying the Extremis setups that made it into the wild. Iron Man has to use a variety of suits and tactics to destroy the Extremis sets purchased by space pioneers, a Columbian drug dealer, armored knights modeling themselves after King Arthur’s court and others. In the conclusion, Tony dons a new red space armor which is also seen in Guardians of the Galaxy #1, leading one to believe the ending of this volume leads to the start of that cosmic series.

This volume has something for both MCU fans and comic book fans. The general story and background builds on the Fraction series. For example, Stark is not leading Stark Industries, but instead is associated with the non-weapons building Resilient. And Pepper Potts is the CEO of that company, whose founder she is not currently romantically linked with. Though it is clear that she is his most important confidant. For MCU fans, this volume has a story arc that includes A.I.M., Dr. Maya Hansen, and Extremis Enhanciles (who do breathe fire). And one gets the sense that Tony’s statement in Iron Man that all that matters is the next mission is in play during this story as he pays no attention to his business matters. So it does help bring fans that enjoyed Iron Man 3 into the Marvel mainstream universe.

The Iron Man: Believe story overall to me felt like an Extremis version of the Armor Wars. Stark is going to take back and destroy a potentially dangerous technology that has gotten out into the open. And even Stark realizes that not everyone who paid for their own Extremis capabilities are evil. The issue is far from black and white, though Stark’s response is honestly one that does not have room for grey. Like Stark’s fanatical protection of his tech, he does the same with Hansen’s.

S.H.I.E.L.D. never appears in this volume. However, S.H.I.E.L.D.’s influence is felt. Stark uses the resources of a “super-spy” friend to get an invitation to an A.I.M. Extremis auction. I assumed that friend to be Agent Maria Hill, based on their relationship from Stark’s time as Director of S.H.I.E.L.D. and their continued relationship in Fraction’s Invincible Iron Man. And he uses a S.H.I.E.L.D. virus to attack the A.I.M. systems that hold the Extremis data.

One interesting sub story is the replacement of J.A.R.V.I.S.. Under Fraction’s watch J.A.R.V.I.S. had fallen in love with Pepper Potts and made poor choices! Stark works on a new A.I. and the new J.A.R.V.I.S. is faulty. So Tony builds a completely new artificial intelligence (A.I.) with a new name which is a tribute to a close friend and designed to keep him in balance.

Marvel NOW! unlike DC’s New 52 is not really a relaunch but a refreshing. Gillen and Land’s version of Iron Man in Iron Man: Believe builds on the stories before it. However, they do take the opportunity for a new A.I., a new suit, and a walk into space which will move the story forward. In an attempt to balance new and old, comic history and live action history, they do an admirable job. Though they have not yet revolutionize the Tony Stark character. But covers of later issues makes me think they just might!