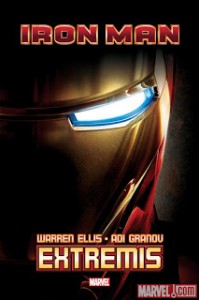 Preamble
The tune will seem familiar, but the words have been changed.  Iron Man: Extremis written by Warren Ellis and illustrated by Adi Granov is one of the inspirations for the Marvel Cinematic Universe’s Iron Man 3.  Published in 2005 and 2006, names like Maya Hansen and Aldrich Killian are going to sound familiar to MCU fans.  But they may not be playing the roles you expect!

Tony Stark is somewhat lost.  He has lost his focus and is throwing himself into tinkering on Iron Man in his private garage.  He is worried that Iron Man is not nimble enough to handle the new threats he faces.  Meanwhile, in Texas at a company named Futurepharm a formula named Extremis is stolen by domestic terrorists.  The Extremis formula rewrites the repair center of the human body and augments ordinary humans.  The formula’s creator Dr. Maya Hansen contacts her old friend Tony Stark to help her uncover the thief.  Meanwhile Mallin, the terrorist who has stolen the formula, is remade as a super solider by Extremis and is challenged in public by Iron Man.  Iron Man is not able to handle the biological based super villain, with super-strength, healing and fire.   Stark is forced to make hard choices in order to remake Iron Man and heal his body and mind so he can face Mallin before he can stage an one-man attack on Washington D.C.

Level Seven Analysis
I think it is safe to say that Iron Man 3 was inspired by Iron Man: Extremis.  The villain in both are Extremis Enhanciles, but here is only one in Mallin.  Dr. Maya Hansen has a major role in this story with plenty of character moments between Hansen and Stark as both struggle to find their way.  And Dr. Aldrich Killian has a small role, much smaller role.  In the end the movie and the comic story do have a lot of differences.  For example, breathing fire seems like a rare ability in Iron Man 3 while in Ellis’ story it is revealed early.  And War Machine,  Pepper Potts, and the Mandarin are nowhere to be found.  It is interesting though to read this story and think about the creative choices that had to be made between page and screen.

This story written pre-Iron Man does recount Iron Man’s origin story and like the MCU which retold the origin a few years later, places the origin in Afghanistan.  The story also established that this senior hero was 19 when he became a hero.  And the volume does a good job of making a hero who was originally established during the Vietnam War era jump forward while keeping the basics of his original story in a modern backdrop.

This Stark, like in the MCU, does not take military contracts.  But it is pointed out to him that he still keeps S.H.I.E.L.D. contracts.  Stark argues this is different as S.H.I.E.L.D. is global.  But having a good understanding of the grayness of S.H.I.E.L.D. does make one wonder if Tony Stark is a hypocrite building for Nick Fury.  I would find it very informative if Stark contributes to the building of the helicarriers we see in the trailer for Captain America: Winter Soldier.

One of the themes of the story is that originally the suit trapped Stark, but now it frees him.  Much of his searching for improving the armor is trying to find ways to make it more aligned with his needs instead of him being a slave to the needs of the suit.  In the end, really that is what Stark is looking for and the problem he could not overcome.  He needs a slimmer more flexible armor that follows his commands instead of something that is limited by engineering and human tolerances!   In both this story and the movie Stark becomes free of the armor, but in different ways.

I will say I enjoy the art by Adi Granov.  It has a modern feel to me.  And it feels epic, cinematic epic.  It is easy to see how Fiege and friends could envision this as the basic story for a movie since it feels cinematic to my untrained eye.

Yes, I am still a little sour on Iron Man 3 (though I will admit I will rewatch it before many other movies and have).  There is a lot on the big screen that I feel left unneeded unanswered questions for me.  But Iron Man: Extremis is a success for me.  The story and the art combine to make a great story, which really could, and did, help inspire a movie and move Iron Man forward in the comics.