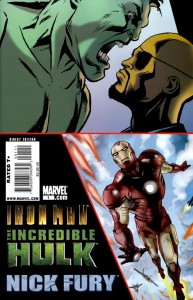 Be careful what you wish for, because just because they give it to you doesn't mean you'll like it.

So does this comic, which features two stories that were originally digital shorts and one original story that never appeared anywhere before this comic, give us the kind of extra stories we really want to see? Or is it just extra stuff?

I started this series with the THOR: THE DARK WORLD PRELUDE comic because it is the most recent addition to the Marvel Cinematic Universe. I decided to do IRON MAN/HULK/FURY next because it was one of the first.

There are three stories in this comic, featuring — you guessed it — Iron man, Hulk, and Nick Fury.

This story is both a prelude and a postscript to the first Iron Man movie. Part one opens two weeks before Afghanistan. Tony Stark and Rhodey are at a party, meet some girls, upset a bully, and get into a fight. Stark is clearly more of a lover than a fighter, and Rhodes does the fighting. And true to Rhodey's character in the first Iron Man movie, he gives in to peer pressure.

Part two is actually between scenes at the end of the Iron Man movie. Right after the fight with Iron Monger, Tony is introduced to SHIELD and Coulson, showing Stark a recording of his fight, tells him they can help him if he helps them. Coulson asks Tony to follow the script the next day, and then we see Coulson's reaction to Tony's “script reading.”

Nick Fury wants to see Bruce Banner's other side with his own eye, so to speak. So he follows him to a bar and pushes his buttons. It's as if Fury used a script from The Incredible Hulk TV series to get Bruce to change.

Of course, when he does see it happen, Fury's reactions — to the initial transformation and then the face off with Hulk — are pitch perfect.

The reason for Fury's visit is the reason this story exists. This story sort of explains why Fury and Coulson were not a part of things in The Incredible Hulk movie.

This is possibly the most interesting one in the bunch. The time is “toward the end of the cold war.” It's a spy story in classic James Bond style, featuring Nick Fury. There are twists and double twists. This is Nick Fury before he was Director Fury, and it's a fun story.

I DO wonder if this was actually originally an Ultimate Nick Fury story, considering it really has no other ties to the Marvel Cinematic Universe. And the only other character who has an historical precedence in any Marvel stories is a man named “Dugan.” We do not see him, so he could be a different Dugan than the one in Captain America. In Marvel continuity, I believe that Dum Dum Dugan was a Howling Commando, as he is in the Captain America film, but in Marvel continuity they use Marvel super science to let him move into the present day virtually unaged with Nick Fury. In the Marvel Cinematic Universe, nothing has happened to suggest something like this.

But all this single reference in a single panel does is illustrate the big problem with expanding the universe in other mediums. Anything you do can be contradicted on screen. Fortunately, here, it's such a minor thing and it can easily be interpreted as Dugan's son or something.

The question is, do these stories add value? Are these extra stories that do more than just try to plug holes? Or are they just a “cash grab”? Or worse, do they just cover ground we've already seen?

Keep in mind, these three short stories are all packed into a single floppy comic. They are short, and while they do not add much to the mythos of the Marvel Cinematic Universe, they DO add to it. I'll be reviewing all the Marvel Cinematic Universe comic books, and I have read almost all of them now. This one, while it is short, feels the most original. They all feature scenes and situations that add to the characters.

Bottom line: casual fans won't waste their time with this, it's fun; hardcore fans will also have fun, and this one is a must have. Unfortunately, it's not available in any collections I've seen yet!