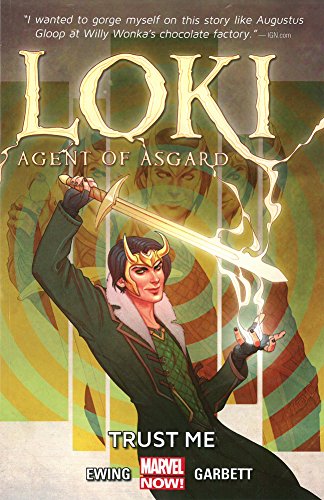 Preamble
You know what villain Marvel Cinematic Universe fans love?  I will give you a hint or two.  He does not have a red face.  He is not on your computer screen.  He has a spear of destiny and almost handed our world over to an alien invasion.  Yes it is Loki.  And I am convinced that it is our love with Loki that led to him getting his own comic book in Loki: Agent of Asgard.

Situation Report
Author Al Ewing and artist Lee Garbett are attempting to help one of Marvel’s most iconic villains turn over a new leaf in Loki Agent of Asgard – – Trust Me.  Young regenerated Loki (it is complicated) decides he wants to start a new chapter creating stories about himself as s hero.  Therefore he has placed himself in the service of the All-Mother (Odin is currently not available) and agrees to return fugitive Asgardians home in exchange for good tales.  To complete this task he recovers Gram, the sword of Asgard’s first hero Sigurd.  Loki’s quest to redeem himself will take him from Avengers Tower, to Monte Carlo, to Asgard where he will find a shocking secret in the dungeons.  Along the way Loki meets Verity Willis, a woman no one including Loki can lie to.

Level Seven Analysis
This really is a book for MCU fans built for MCU fans.  Agent Coulson early on bumps into our newly minted hero, and it is made clear that they have a history!  There are references to S.H.I.E.L.D. having ledgers with red.  And the Hulk is always angry.  But most of all, this Loki is young, handsome and smoking hot (I’m comfortable saying this since he has shirtless scenes).  This is a book that has been crafted to please the MCU fan.  I attempt all the time to slip comics to a family member.  Other than All-New X-Men this is the only book they have really liked to date that does not include a Disney setting. And the reason for the thumbs up is the MCU friendly content.  So if the target is the MCU fan, Marvel is winning.

I am not going to explain the whole Loki history because I do not understand it all.  He was old, but he died.  Then he was really young, but he might have died.  Somewhere in there he was a lady. And now he is young adult young, and super handsome.  That may be the best summary ever!

What I really like is the Thor/Loki interaction.  They really do seem like brothers.  And Thor at times wants his brother to succeed just as much as anyone else.  And at other times he is the angriest at Loki.  Kind of sounds like the MCU does it not?

Another reason for joy about MCU fans is the inclusion of Lorelei.  This Lorelei is not trying to take over the Earth.  No, she is just looking for the next big score as a thief.  Her inclusion gives the book a cool Oceans 11-type feel.

Old Loki does make a few appearances.  The most important is an entire sword and sorcery style tale where we discover Loki has ties to the origin of Gram.  And throughout the book Old Loki’s shadow constantly leads us to ask can Loki be anything but a villain.

Verity Willis is a real cool addition.  The attraction is simple, Loki the God of Lies cannot lie to her.  He must be completely honest because she sees through the lies.  It is a cool kind of friend for Loki to have. And maybe it could develop to more. Yes, I am shipping them already.

Conclusion
MCU fans you finally got a book targeted at you.  The ironic thing is the story is based around a villain.  But from the moment Agent Coulson and Loki share a panel you will feel comfortable.  And in the end, it’s light and fun.  And some days light and fun is what you need!