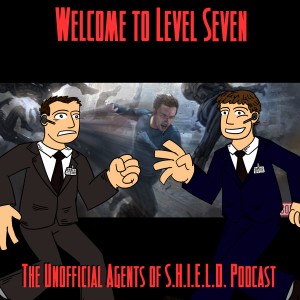 No new Agents of S.H.I.E.L.D. episode this week, but Ben and Daniel and the rest of the MCU fans did get some Marvel goodness this week in the form of the hour long Marvel Studios Assembling a Universe special, and we talk about in this episode.

Today's episode was sponsored by Agent Brent. You can help support the show AND get a bonus episode (a feature-length commentary on Howard the Duck) by going to https://welcometolevelseven.com/howard

* No more polling! Ben and Daniel will be referring to our community as “agents.”

* Captain America 3 will be facing off with the Batman/Superman movie. Source: Hollywood Reporter

* Unless they don't! Batman/Superman seems to have blinked in this game of movie chicken! Source: A Brazillian website called Judao

* Agents of S.H.I.E.L.D. has a finale date set. May 13 will be the final episode of the season. Source: Variety

* We appeared on the Nuff Said Podcast, which will be appearing this week in their feed!

* DVD Extras! Lots and lots of material shot for DVD extras and press junkets, compiled with some new interviews.

* Some small glimpses at Agents of SHIELD, but not much. At all.

* They spoil Captain America: The Winter Soldier completely! Well, not completely, but they do give away what could have been an awesome reveal for some people.

* Quick peak at Guardians of the Galaxy.

As usual, we have some awesome feedback from an awesome community!