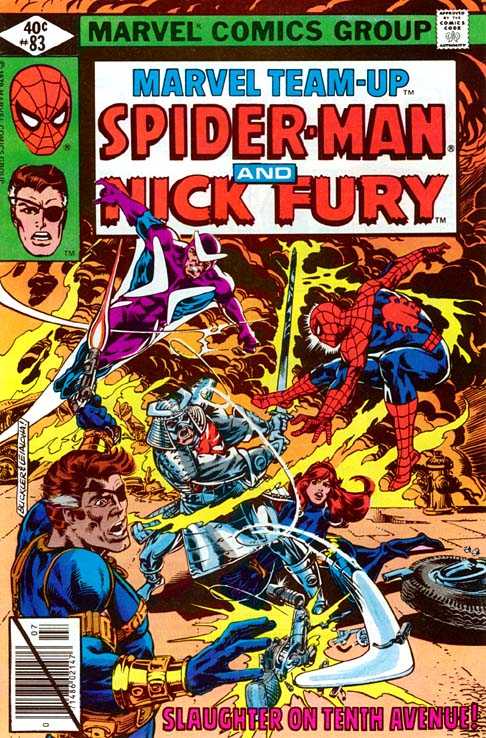 Preamble
In the midst of my recent move I downsized a lot of books.  So one day I went to a used bookstore with five very full boxes of books.  I sent a picture as I went in to Agent Ben of all my boxes.  When I came out I sent him the picture of the one book I came out of, Marvel Team-Up #83.  Now Agent Ben’s reaction made me think I had traded the family fortune for a pile of magic beans.  But sometimes beans really are magic.

Situation Report
As the story opens Spider-Man lays murdered on a New York rooftop.  And the suspected killer is Nick Fury!  Actually, Spider-Man is not dead but just knocked out by an anapestic gun.  But his companion, school teacher and Black Widow doppelganger, Nancy Rushman has vanished.  Spidey rushes to S.H.I.E.L.D. headquarters where Rushman is being held captive.  Rushman escapes in the only clothing she can find a Black Widow costume.  As Spidey helps Rushman make her escape, the unseen villain dispatches Boomerang from a hellicarrier!  And despite Fury’s questions if Black Widow may have returned to her Soviet roots, he stands beside Spider-Man as they defend the newly agile Rushman.  The issue ends with a cliffhanger that makes you excited about the next issue.

Level Seven Analysis
Marvel Team-Up #83 has a cover date of July 1979, but time travelers need to go to April 24, 1979, to pick it up from the racks.  And this issue looks and feels like classic Marvel.  It is written by Chris S. Claremont with pencils by Sal Buscema.  And it should have been right up my comic sweet spot.  And it is!  I really wanted to read issue #84 when I was done.  But when I looked it up I saw that it was Spider-Man and Shang-Chi.  Now that felt like a letdown because this story needs to continue.  Then I decided to scan what #85 was about.  That issue is a team-up of Spider-Man, Shan-Chi, Black Widow and Nick Fury.  Now that seems like a full story I want to read!  I think I will be throwing them on my to-get list.

The name Rushman will sound familiar to Marvel Cinematic Universe fans.  Black Widow’s cover in Iron Man 2 is Natalie Rushman.  This will likely led to a geek-out moment for most Agents.  Here it is explained by Nick Fury that Nancy Rushman was Black Widow’s original cover when she came to the United States as Soviet spy.  Fury really wonders if Rushman is Black Widow and can she be a spy?  He is not the only person who is concerned, Rushman wonders if she is Black Widow.  She finds that she has some fighting skills she should not have as a school teacher that appear to come naturally to her.  I also find myself wondering if she is Black Widow.  There is part of me that thinks she is not Widow and that Claremont is throwing out a lot of false clues.  But of course I will not know unless I can get my hands on the next issue!

Nick Fury has a lot of worries.  S.H.I.E.L.D. agents like the Contessa appear to have an unnatural desire to kill Black Widow.  He cannot see a reason why trusted agents are turning on a trusted ally.  And he does not even know that the real bad guy of the story is using a S.H.I.E.L.D. hellicarrier as a headquarters.  So please listen as I say this again, S.H.I.E.L.D.’s history is one of constantly being infiltrated.  We should not be shocked.  And for some reason it keeps getting rebuilt!  This fact is one that makes me thing that eventually Nick Fury in the MCU will be pulling the eye patch on again.

Conclusion
The beans were magic.  I loved this story.  It is comic storytelling as I remember it as a kid, and it should be since I was raided on Claremont’s later Uncanny X-Men run.  I loved this issue, want to find more from this arc and it was worth the trade I made that one fateful day.

(Note: Daniel along with this one comic also walked away with cash and space on his bookshelves.)