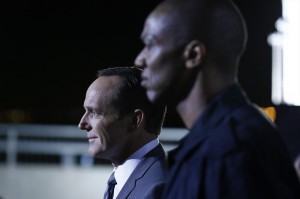 I feel like every time I turn around there is another story, another article, that takes the opportunity to poke Marvel's Agents of S.H.I.E.L.D..  I can see why folks might want to, it is part of a major franchise and has Disney and Marvel behind it.  It is quite the story if the show fails.  And so I get it that some folks are simply pre-disposed to not liking Agent Coulson's team.

But recently I read an article from a commentator who I would call comic book movie friendly.  And it was negative.  And it was like something finally snapped in me.  I could not hold it anymore, I have to stand up for the Bus and its occupants.  And while everyone is free to have an opinion, I am too.  Now I am realistic, I have questioned how straight roads in Ohio are.  But I must stand up and say I am loving this show.  So here are my three reasons (with some help from the WelcomeToLevenSeven.com community), why Marvel's Agents of S.H.I.E.L.D. makes mine Marvel!

1) Great Performances:  It is because of Clark Gregg that this show exists!  The Marvel Cinematic Universe (MCU) lucked into the perfect combination of actor and role.  It was a slow burn making Coulson a fan favorite, but by the time of The Avengers Clark Gregg had become the emotional heart of the MCU due to his humor and his ability to emote sincerity.  I am a grown man, but I will admit that Agent Coulson's finale on the big screen brought me tears!

Clark Gregg has continued to deliver weekly in Marvel's Agents of S.H.I.E.L.D..  Yes, Coulson continues to be funny.  And except for one episode he brings me smiles weekly as he challenges Spider-Man as the Marvel Quip King.  But it is the heart he brings to this role that catches my attention and must be recognized.  His performances are heartfelt, earnest and authentic.  In “Seeds” you believe he is hurt, that Coulson's core has been rocked and that it is more than a story element.  As a viewer you feel Coulson's pain as you have been along for the ride with him and he has become an old friend.  The strain on Gregg's face tells the story, our hero is emotionally scarred, and because of the incredible performance the fan hurts with him.  Of course this is not the first time that Gregg has delivered this type of performance.  I think back to an early episode, “F.Z.Z.T.” as he sits with a dying firefighter.  Coulson can do nothing to help this man.  But the delivery and body language tell you that this Agent of S.H.I.E.L.D. would do anything to take this burden up himself, to comfort the man, to make his last moments ones of connection to another.  It is a portrayal that has stuck with me for months, and as one who believes we can learn from stories, it is a moment that I have wondered if I can live up to it myself.

Admittedly, we came for Coulson, but we are staying for the rest of the cast.  Chloe Bennett as Skye is a polarizing character.  I believe the fact that she has been so central to the show and taking the focus off Coulson has created a backlash towards her.  But like Gregg, “Seeds” was an episode that highlighted her acting ability.  In the episode one journey ends for our young hacker.  As an audience member we expect her to be rocked to the core, instead she is inspired and inspiring.  But best of all it was authentic!  I believed that she was hurt by these the revelations that she was confronted with.  But I also believed that her spirit was not broken. Bennett brought the words from the script to life.  And this is not even mentioning her take on “Agent Melinda May” f a week earlier in “The Magical Place” that was funny and removed some major tension from a stressful episode.

All of the cast of Marvel's Agents of S.H.I.E.L.D. have delivered.  Yes there have been times where the script may not have allowed for an actor to shine.  And yes, we have had to learn who they are.  But twelve episodes in, I fear for them.  I worry that one of them could die or betray Coulson.  And that fear has me on the edge of my seat!  Because, losing one of our actors will be a painful experience.

2) World Building:  Marvel's Agents of S.H.I.E.L.D. has a story problem.  The Marvel 616 Universe, Marvel's main universe is full of fascinating characters.  I have often argued that Marvel's C and D list is more interesting than others B list heroes.  They are complex, broken and human.  They are ripe for storytelling.  Too bad many of them cannot be used by Joss Whedon's team.  First, contractually Marvel has given the rights of many heroes to others for live-action portrayals.  So the X-men, the Fantastic Four and Spider-Man (along with their casts) are unavailable for Tuesday night stories.  Second, of those that are left Marvel and the MCU must be very careful in their use.  Marvel has to be committed once they drop a known character into the MCU, because they cannot take it back.  The television crowd is not as kind to retcons as the comic crowd has proven to be.  And of course any comic hero and villain who enters the show must be MCUed (my word for realistically plausible origins).  Honestly, I think the way that Gravitron was handled in “The Asset” fits the mold of the MCU.  Additionally, I was delighted that Blizzard's origin emerged in “The Seed”.  Ironically, I have read comics with Blizzard, and was amused afterwards to discover that I had forgotten him.  And Blizzard's appearance made me pleasantly remember that Iron Man story.  But it was the MCU portrayal that most stuck out to me.  So despite the claims no comic book characters are coming onto the show from critics, we have now at least two not counting Nick Fury.

But really it is the world building that Joss Whedon, Jed Whedon and Maurissa Tancharoen have with those limitations created a world.  This world has included interesting supporting characters like Mike Peterson and Akela Amadour.  Honestly, Mike Peterson is such a success and likable figure that fans would like to see him more.  And as a father, Peterson serves as a story contrast to the Bus crew since he has to balance heroing and parenting.  Additionally, the writing team has given us cool toys like Lola (a classic S.H.I.E.L.D. toy), the Bus with it's retractable roof and the always bloodless night-night gun (which would make Hannibal Smith proud).  On Tuesday night we watch a world being built.  And that world is the Marvel Cinematic Universe, with television soon outstripping theatrical releases.

I have seen critics applaud the fact that Mike Peterson is the comic book character Deathlok.  Honestly, part of me is sad that they have chosen to take that path.  Honestly, I wish Mike Peterson would be free to stand on his own without the pressure to be an clone of something found in the Marvel 616.  But I reassure myself that this choice has not painted the writing staff in a corner.  There have been more than one Deathloks, so Michael Peterson could easily be yet another and have a path of his own into the future.

3) Opening the Mystery Box:  I recently asked a friend who watches Marvel's Agents of S.H.I.E.L.D. why?  He watches every week through his DVR (please note not a live number) even though he has little experience with comic books, superheroes or MCU movies.  In fact, he is more likely to mock them than watch them.  Now, he admits it is not his favorite show.  And he could think of shows he liked better.  But in the pilot he saw a mystery that brought him back the next week.

When I started watching Marvel's Agents of S.H.I.E.L.D. I thought this show would be season based.  Every season we would have a big bad (which we do have) and secrets would not be revealed quickly.  In fact I expected Coulson's activities after the Battle of New York to be a series finale resolution (if ever) and Skye's problem would be revealed in season 2 or 3, not in season one.  I have been surprised how much mystery our show has revealed.  But every revelation leads you to another mystery.  So I am calling this comic book television.  In comics we get pseudo-resolution at the end of every six issue arc.  But we are also given a cliffhanger to pull us into the next arc.  That is what I see in front of my eyes.  A mystery is revealed, but it uncovers another mystery to explore.  And if the writers can keep this up for five seasons and a movie I will be a happy boy!

I love Marvel's Agents of S.H.I.E.L.D.. I know some of you do to!  So what can you do?  First, lets ignore opinion pieces that only seek to enjoy the non-existent fall of our favorite Tuesday show.  And let us not sugar coat what we see, but let us tell our friends what we like (I like to have folks over for appointment television on Tuesday nights)!

Marvel's Agents of S.H.I.E.L.D. is a great show that makes mine Marvel!