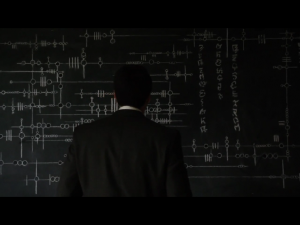 We sort of glossed over the actual writings on the boards in EYE SPY, in favor of talking about the prospects of the various organizational players in the Cinematic Universe (in EYE SPY there are three groups: SHIELD, whoever HAS the writings, and whoever WANTED the writings).

So let us know here what you think the writings are.

Do you think they are something from the Chitauri invasion of New York?

Could it be something leading into Guardians of the Galaxy?

Perhaps it's from Asgard?

Or is it some sort of super advanced human writing?

Or do you have an even better idea? (If you vote for “something else” let us know what that something else might be below.)