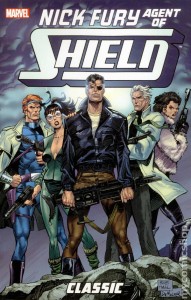 In the wake of Nick Fury vs. S.H.I.E.L.D., the organization has been shattered. Agents are dead, and surviving agents are dispersed. Nick Fury has retired to a cabin with Agent Kate Neville, trying to avoid further involvement in the spy world that lead to the deaths of those he cared for. But in Nick Fury Agent of S.H.I.E.L.D. trouble comes looking for our hero!

With a shattered and dispersed S.H.I.E.L.D., Nick Fury looks forward to retirement and sour reflection. But former associates are kidnapped or killed by the Death’s Head, an offshoot of HYDRA. Fury’s investigation of this mystery takes him back to World War II and an early confrontation with HYDRA’s founder Baron Von Strucker. The super agent discovers an alien installation that is linked to the foundation of both HYDRA and S.H.I.E.L.D. and the technology that they developed. In the second story in this volume, the newly resurrected S.H.I.E.L.D. (now the Strategic Hazard Intervention Espionage Logistics Directorate) is placed under Fury’s command by the United Nations who has taken the destroyed Council’s leadership. Fury and his team face OFF against Leviathan, leader of the Coven, who has stolen a United States Air Force stealth bomber. Fury is challenged by this villain able to influence others through the power of faith. Finally, the volume ends with a solo Nick Fury story where he attempts to help an old friend rescue his kidnapped daughter.

This volume collects Nick Fury Agent of S.H.I.E.L.D. issues 1 through 11 and serves as sequel to Nick Fury vs. S.H.I.E.L.D.. This offering however loses the spy feel for the original and feels more comic book than spy novel. The art is not as crisp and the stories are not as sharp. So I would argue that S.H.I.E.L.D. completeists would probably want to give the volume a read, mostly to see the new S.H.I.E.L.D. in action but more casual fans would likely prefer other collections.

There is some interest in seeing what happens to the gang in the wake of S.H.I.E.L.D. being decommissioned. Dugan enters domestic life. The Countess joins the C.I.A., staying in the spy game. Pierce becomes the caretaker of S.H.I.E.L.D.’s central headquarters. And Fury mopes around a cabin with his new girlfriend. We get to see all these locations as Death’s Head attacks Fury’s former colleagues. One of them is actually killed, though the volume ends with the cliffhanger of an empty coffin. And we know from later stories that this agent is very much alive. I just wish Fury’s short-lived retirement had been more interesting.

We should probably talk about S.H.I.E.L.D. tech. In this issue it is confirmed that a new Helicarrier is being built. The contractor is Stark Enterprises and Dr. Richards, which I think we can assume is Reed Richards of the Fantastic Four. But the real big news is smaller personal flying transportation. I am racking my brain and cannot remember a flying car, but we do get flying robot burros!

Nick Fury is back in the saddle again, literally thanks to his flying robot burro! S.H.I.E.L.D. has been reassembled under a new charter a new name and an old director. With the gang back together I think we all agree the Marvel universe is a little safer!