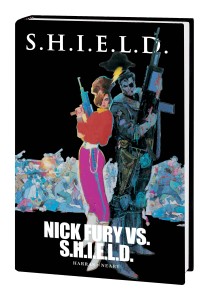 I have heard it said that Nick Fury is the James Bond of the Marvel Universe. He is the super spy amongst super heroes. If any storyline proves this statement its 1988’s Nick Fury vs. S.H.I.E.L.D., which easily could be rewritten for the English super spy. It is a tale of deceit, betrayal, and high tech spying gone wrong.

As the story opens, Nick Fury and S.H.I.E.L.D. are attempting to salvage a downed Helicarrier in New Mexico. The Helicarrier’s power core is going critical which could result in a nuclear explosion. While the actions of Agent Clay Quartermain save the civilian population, he loses his own life. And A.I.M. forces attack and steal the power core for themselves. A sleeper S.H.I.E.L.D. agent within Roxxon discovers that A.I.M. stored the core at one of Roxxon’s facilities. An aging Nick Fury wonders if he still has the skills needed to be a superspy, but does not have a chance to retire as the Council orders Fury’s death after he discovers a group within Roxxon named Delta has its own S.H.I.E.L.D. agents. New director Jasper Sitwell puts the full resources of S.H.I.E.L.D. and Delta behind the search for Fury who has gone to ground. Fury will find that the truth behind Delta is almost too impossible to believe, especially after Agent Quartermain reemerges. The story concludes with major implications for the future of S.H.I.E.L.D..

There is so much to consider in this book. First off we have the character of Nick Fury himself. This veteran soldier and spy is gruff, all business and far from a sensitive man. A romantic relationship is hinted at between Fury and Agent Countess Valentine Allegra dela Fontaine. And he has close friends in agents like Dugan who prove loyal. However, with S.H.I.E.L.D. blocking access to his friends, them questioning if they could kill Fury, and some of his closest friends on the trail to kill him, Fury proves incredibly resourceful as a solo agent. Yes, this Fury could easy find himself translated into the most fantastic Ian Fleming novels. Though I was a little shocked with images of old Nick Fury in a thong!

Agent Jasper Sitwell was trained by Nick Fury, and Sitwell holds to that training especially when it comes to loyalty towards S.H.I.E.L.D. and the Council. I was surprised with this blond Caucasian Sitwell, as we have seen him twice already on the big screen played by the dark haired Hispanic actor Maximiliano Hernández. I really like the cinematic Sitwell which we saw introduced in the Marvel Short, “The Consultant” alongside Agent Coulson. We learned here that Sitwell was only Level Six! This was followed by an appearance in The Avengers and the short “Item 47” which makes Sitwell appear to be the heir to Coulson’s legacy. And he will appear in Captain America: The Winter Soldier. I hope that he turns out to be more loyal to people than organizations in his future appearances!

Another future character in Captain America: The Winter Soldier is Alexander Pierce. The cinematic Pierce, played by Robert Redford, is the head of S.H.I.E.L.D., Nick Fury’s boss and maybe a member of the Council. This Pierce is very different, he is almost a joke within the halls of S.H.I.E.L.D.. Many cannot believe that Fury has allied himself with this useless account! I expect that Redford’s Pierce will be more handsome, skilled and respected. Though the comic book Pierce does prove his worth to Fury by the end of the story.

One of the rumors that I had heard was that Nick Fury vs. S.H.I.E.L.D. was the source material for Captain America: The Winter Soldier with a story where Fury was on the run and surrounded by a group of loyal operatives like Captain America. I can see where this story would make a good movie but the roles of heroes is very minor and even that description sounds like a Nick Fury story not a Captain America story. Plus the Winter Soldier tale already has a comic book origin and I would expect that would be their primary source material. Yes, there could be comparisons between the stories, including the characters of Sitwell and Pierce. But even they are being used in different ways than found here. And that movie is not a Nick Fury movie! If Kevin Feige decided to launch a Fury specific movie, this would be a good place to start for pulling the story together. Though I can see how after The Avengers that the Council would be really ticked with Fury.

We do learn a little about Supreme Headquarters International Espionage Law-Enforcement Division. At the time of this story they did have Helicarriers in their arsenal. S.H.I.E.L.D. agents use Life Model Decoys (LMD) as body doubles. They were overseen by a Council who appointed Nick Fury. There were small stations and large headquarters hidden throughout the United States. And S.H.I.E.L.D. oversaw 4,232 agents in the United States. They might just be in your town! But without spoiling the story, it is safe to say that the S.H.I.E.L.D. profile is drastically changed by the end of this tale!

Nick Fury vs. S.H.I.E.L.D. is a greatly written story by Bob Harras and penciled by Paul Neary. It is a story about heroes without powers! It is a story of espionage and betrayal. And it is well worth your time to see Nick Fury as the star not a supporting character amongst Gods.