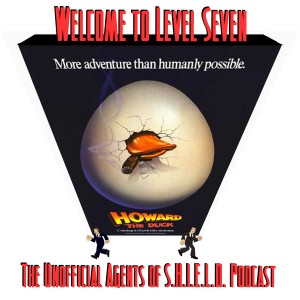 It feels like we only just released our Howard the Duck Commentary! But we are already preparing to record another Commentary Bonus Episode!

What is a Commentary Bonus Episode?

Well, it's an episode that isn't part of our primary discussion of the Marvel Cinematic Universe that we record as a special thank you to anyone who helps support the podcast! It's an added value item. Daniel and Ben work together to create an episode that can be listened to both with or without the movie we're doing a commentary on, filled with facts and fun.

But WE chose it!

So here's the twist with our NEXT Commentary Bonus Episode:

We are putting our fate in YOUR hands! You can nominate the movie you want to see us do, and then we'll compile them and you get to vote on them!

Here's how it works:

1. Nominate the movie you want us to record about in the comments below.

2. Movies MUST be: A. about Marvel characters (so no Catwoman or Man of Steel), B. available for legal purchase/viewing (so no Dr. Strange TV movie, as awesome as it may be!),  C. feature length (as defined by SAG: 80 minutes or longer), and D. live action (so no Marvel Anime or Next Avengers).

3. Nominations will run between when this is posted and April 22 at 8:00 EST. (Basically we'll accept nominations until we record next week's episode!)

4. For a movie to qualify, it must receive two nominations. If the movie you want to see us record about has already received two nominations, you can still comment and tell us, but it won't affect the voting. Two nominations is all that is needed to get it on the ballot!

5. After that, we will open a poll and let all WTL7 Agents vote on what movie will be selected! Whatever the Agents choose will be what we do, even if it's THAT movie. Or THAT one. And yes, even THAT one. Sigh. Ooo, we'd LOVE that one!

Basically, we want to have fun with this and we want to include you in the fun!

NOMINATE YOUR CHOICE IN THE COMMENTS BELOW!