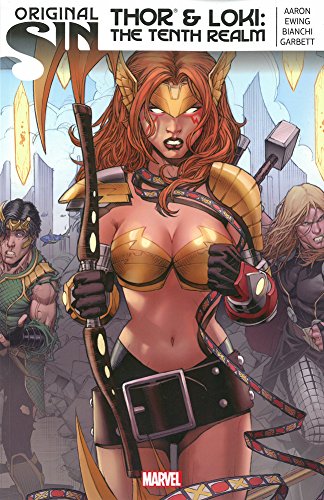 Yes, another Original Sin tie-in that impacts an Avenger!  And with the mini-series having some many impacts to Thor, clearly Original Sin: Thor & Loki – The Tenth Realm is a volume agents should take notice of.  This story could have some big impacts for many “especially for…sister.”  Wait when did Jason Aaron start writing Star Wars again?

When the Truth Bomb went off Thor learned a shocking secret.  He had a sister!  And this news is big enough he left the battle and ran straight to mom to get the full story.  Actually he has most of the details thanks to the Watcher’s exploding eye, there is in fact a Tenth Realm and his sister thought dead is alive,.  Odin and Freyja believed that the Angels of the Tenth Realm killed their daughter Aldrif.  But instead she lived and was raised by the Angels as their own.  She was lost from the rest of the realms as Odin closed the door to their home.  Meanwhile, in space Angela of the Guardians of the Galaxy returns home to the Tenth Realm!  And Old Loki arranges for Thor and Young Loki to meet the Asgardian hating Angela, who is not only an Asgardian among Angels but the long lost Aldrif.  And of course, as Stan Lee would decree, the two heroes have to battle.  Meanwhile the reader asks is Loki being loyal and if so to who as he plays off Angels and Asgardians?  The story ends with several key changes to Thor’s world before he goes off and has a private word with Nick Fury!

I have read a few of these Original Sin titles, not all of which rated a comic file.  These volumes have so far generally discussed a truth, a new truth that really did not impact the storyline and history of the main heroes.  I will say that Original Sin: Thor & Loki – The Tenth Realm is the first volume that really impacted the Marvel 616 in a considerable way and it does not even let us know why Thor is now unworthy.  But I can say some characters change roles, others enter a new state of being and it firmly establishes that Thor and Angela are Luke and Leia.  But I do need to ask who does that make Loki?  R2-D2?

The Tenth Realm may be full of Angels but they are not very angelic.  Angela to start with is a good example.  Despite having no wings she is a highly respected member of the community.  She is a warrior and the Hunt-Leader.  Basically these angels respect martial skills and not compassion.  Additionally, the Angels, especially the Queen of the Angels, love and respect payment.  They do not do something for nothing.  They were paid to wage war against Asgard.  They would take payment to ally with Asgard.  Basically the highest bidder wins and it is a hard lesson for those that are cheated of payment for their efforts.

I know that Neil Gaiman created Angela, but I am not a fan. I am also not a detractor.  She is just not for me.  So I did not feel a need for her to be retconned into the Marvel 616 and Thor’s life.  I also felt like she was forced into the Guardians of the Galaxy.  It sometimes feels like Marvel is attempting to fit her into the universe instead of just letting her be a hero on her own stories, which I have never read.  I do not see a need to push her into this universe even if Gaiman has huge amounts of fans.  But at least she has a power set and look that fits the Asgardians so it feels more natural than making Rocket Odin’s third son.

These volumes have generally been co-written and drawn.  In this case Jason Aaron and Al Ewing come together to write the story.  Aaron wrote Thor: God of Thunder, and Original Sin, while Ewing helms Loki: Agent of Asgard (yes one is in past tense).  This allow both Thor and Loki to share screen time and be written in the same voice as their own titles.  For example, the Loki part of the story really seemed to fit into the earlier title.  This includes the many incarnations of Loki including additional transformation in this volume!

Thor & Loki – The Tenth Realm is an impactful story, at least until, as Agent Ben points out, Secret Wars wipes the slate clean!  Gaiman’s Angela now as a role in the Marvel 616 as Thor’s sister.  I am glad I read this book, but I still prefer Aaron’s Thor solo writings.