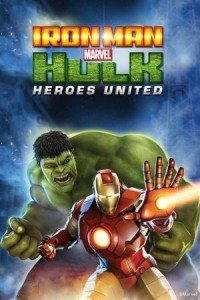 While Tony Stark spars J.A.R.V.I.S. in a practice session that destroys one of his suits of armor and one of S.H.I.E.L.D.'s jets (this scene takes place in Tony's personal Helicarrier), a surprisingly lucid, although still not too intelligent, Hulk battles Abomination. Abomination and Hulk are captured by Hydra, who wants to use their gamma radiation energy for a nerfarious plan, which backfires and results in the unleashing of . . . Zzzax, a power hungry (literally) energy creature!

Oh, and there are wendigos who show up, because . . . they needed something else to fight in act two.

This is a video game. I feel like I just watched the 70 minutes of cut scenes from a video game. From the cheap looking animation to the thin plot to the multiple battle scenes in seemingly random locations (while fighting Zzzax they take a brief side-trip into a cemetary to fight some wendigos that have nothing to do with anything we have seen so far. Of course, Tony Stark does stop during that fight to say, “This is better than a video game.”

Only two characters have humans faces, everythign else is either a weird looking creature (Abomination is especially strange looking) or has their mouth covered. Hulk seems to be designed after Mark Ruffalo's Hulk, and is the best facial animation. It's expressive and somehwta realistic. Tony Stark's face, unfortunately, is stiff and is what first made me think of video game cut scenes. The mouth and eyes just seem off to me.

Hulk is hungry was a running gag that they returned to about a dozen times. Another running gag was Hulk punching Iron Man unexpectedly a number of times (because it was so funy when he did it to Thor in The Avengers, remember?). There's lots of physical comedy, heroes falling unexpectedly, Hulk scratching his butt, that sort of thing. And, of course, Iron Man and Hulk argue the entire time, calling each other names and giving each other a hard time . . . the ENTIRE time.

But it is fun to see what the MCU version of old school villain Zzzax might be, even if this isn't truly MCU. In fact, one way to describe this would be as a video game, but anotehr way would be “old school comic book team up.” It goes through all the motions: each hero gets their own action scene, then they meet and fight each other, then they realize their misunderstanding and reluctantly work together, then they learn from each other and defeat the bad guy.

There is one theme that comes up, almost, of energy waste and use and green energy. Which is ironic, considering the way Tony Stark seems so willing to just throw money away, letting his stuff get destroyed so cavalierly, even before the bad guys show up.

And the opening credits, with their tribute to old school Marvel comics are really cool.

Probably enjoyable to audiences who enjoy lots of mindless action and semi-funny banter, but this will not be satisfying for people who want a little more sophisticated fare.

If one element had been great, I'd recommend this. Unfortunately, everything was just about average . . . or slightly below. Story, character, style, theme — none of it really worked for me. This was made for ten-year-olds, and that's not a bad thing. It's just not my thing.

If you do watch this, wait for the bonus scene at the end — it sets up the sequel. But I;m fairly certain I won't be bothering with it.

Weak animation, weak script, weak line deliver from Tony (poor actor has to live up to