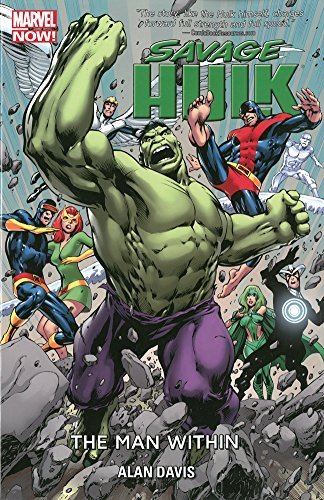 We all agree, the Hulk can be savage.  So the new title Savage Hulk: The Man Within attempts to live up that that moniker.  But instead of something fierce and bloody I found a story that would be fit for a Comic Book Time Machine with a new story crafted by Alan Davis that looks back into Marvel’s past.

In the wake of X-Men #66, the Hulk is hunted by the Stasche, I mean Major Talbot!  To make things worse the Abomination is also pursuing the Hulk while the Leader observes and attempts to manipulate the situation.  Professor Xavier of the X-Men wishes to free Bruce Banner from his gamma induced prison since Banner recently freed him from a coma.  Professor X attempts to go into Banner/Hulk’s mind to free the scientist from the brute.  The Leader uses Xavier’s compassionate act as an opportunity to turn Hulk into a gamma battery.  And as a side-effect a member of the X-men suffers an unpredictable gamma evolution.  Following the conclusion of this story arc, the collection includes a reprint of the original X-Men #66 which recounts how Banner assisted the critically injured Professor X written by Roy Thomas, penciled by Sal Buscema and edited by Stan the Man Lee.

I do enjoy nostalgia.  So I like the idea of this story reaching back to an older X-men story created by legends that I had never read.  And I liked the fact they included the original story in the collection.  But I was not tense.  I knew that Banner could not be permanently cured if at all since he would continue to be hunted after this call-back story.  And I knew that all the X-Men were safe from harm.  To be blunt, it only has a minor impact with it expanding the first Hulk/X-Men meet-up.

The story overall is fun, though tension free.  But Davis not only brings the story, he also provides the art.  I was really struck by a great two-page splash of Hulk versus the X-Men that I really enjoyed.  It is the reason we have splash pages; cool fun images.

Marvel Cinematic Universe (MCU) fans should feel comfortable in this story.  We get appearances by Talbot, Abomination and the Leader…all who have appeared in the MCU!  With a Wolverine free X-Men in the house one can begin to dream of the possibilities that have been bared due to contracts and free enterprise.

Much of the fight within this book is Hulk versus Banner and who is in control.  We get to tour Banner/Hulk’s mind with Professor X, to see how they perceive themselves.  The reader is left to consider which of the two is really stronger.  Is it the man or the monster?

One of the X-Men gets gamma evolved!  And it is pretty cool I have to admit.  I really wondered if the evolution changed the hero’s personality or if like Super Solider Serum in the MCU just brought to the top what was already there.

Alas, Bruce Banner could not be saved.  He continues on as the Hulk and the X-Men return home.  While Savage Hulk: The Man Within was low on impact, it did provide an interesting adventure.  And while I may not jump to encourage everyone to buy it (because I am cheap) it is worth a borrow.