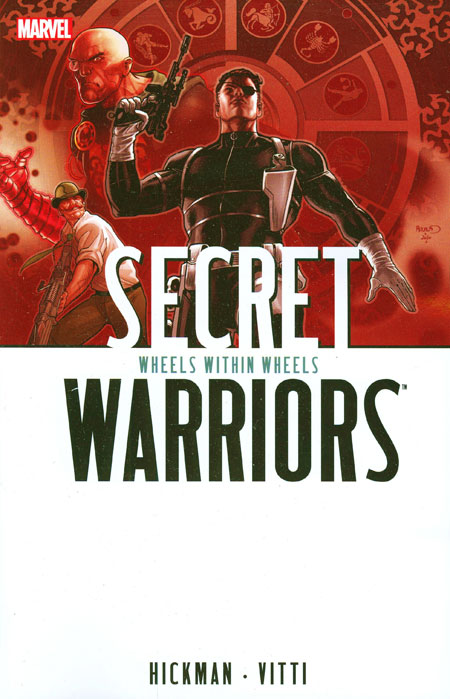 Jonathan Hickman’s and Alessandro Vitti’s Secret Warriors: Wheels Within Wheels brings this series to an end.  The series has been S.H.I.E.L.D. fantasticness, despite the fact that Fury has at times been an agent of nothing.  Would Hickman give his readers a satisfying end to this saga?

The volume opens in 1961 as a shadowy figure gathers the world’s greatest intelligence agents to sit at the wheel of the Zodiac.  The mysterious man offers a game with the prize being the world and the Zodiac members including Nick Fury engage in a global scavenger hunt.  In today’s world, Nick Fury and Baron von Strucker have both been captured by Kraken.  And Kraken prepares to execute both men.  As they await their fate von Strucker taunts Fury that his favorite sport was pulling Fury’s strings, though all may not be as it seems and the key is the Zodiac.  Along with facing his final fate, Fury has to reconcile himself with his protégé Daisy Johnson.

Level Seven Analysis
The opening really threw me off.  As the Zodiac entered the ancient city of Pieta, I was pretty sure the mystery man was Leonardo da Vinci from Hickman’s fascinating S.H.I.E.L.D.: Architects of Forever.  And at one point I had convinced myself we were not in the Marvel 616 because Fury looked so different to me as he sat the Zodiac table.  As the story plays out it becomes clear that this was our Fury and universe.  I can see how Hickman would want to tie his two S.H.I.E.L.D. stories together.  Though da Vinci seemed more interested in the Zodiac than S.H.I.E.L.D. business. I also find it interesting that this is not the last attempt by a Marvel writer to tie Hickman’s earlier work into S.H.I.E.L.D.’s history.

Yet again this story established that Fury makes the hard choices.  His role with The Unseen should not shock us with this piece of history in our pocket.  And Fury knows making the hard choices has costs.  In this series his choices led to the deaths of good friends and a son.  But perhaps his choices have helped make the world a better place.  Hickman also shows that Fury does have a heart as he reaches out to Daisy.  Hickman leaves open the unresolved issue of Fury’s girl! Oh, and Hickman shows that Fury is not as dumb as the villains he fights believes (showing maybe my claims that S.H.I.E.L.D. is incompetent as false).

We now know that Kraken will be the big bad of season two of Agents of S.H.I.E.L.D..  Hickman created Kraken in Secret Warriors.  Other than the fact that Kraken is a dedicated super-powered Hydra agent who used the organization to advance his ideals, well I cannot really shed any other hints because of a giant twist in this volume.  I do hope we do get some form of his armor though as they MCU Kraken.

Overall, I really enjoyed the Secret Warriors series.  And I am considering buying the entire run in collections.  I would happily, and do plan to do so, reread this series because it brought some really interesting stories.  And when Agent Ben ejects me from the Hub I will become Agent Butcher Agent of Nothing, Hot Mess.  And Hickman did treat us right tying off the loose ends in Secret Warriors: Wheels Within Wheels.