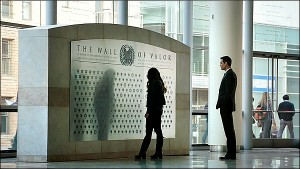 “Hey, look, I randomly found the one name from a previous and an upcoming MCU movie!”

And X-Files cold open (but with no deaths)! Some FitzSimmons background. Some S.H.I.E.L.D. background. A new possible villain, or at least antagonist, for FitzSimmons in the future. Coulson, sad in his office. Bucky Barnes name dropped. Lots of new information about Skye's backstory. Scary S.H.I.E.L.D. technology reach, finding a guy who hasn't wanted to be found for years through facial recognition in a Mexican teenagers selfie! Lots of topsy, turvy plot twists. And May reveals her relationship with Ward. Lola spreads her wings. And Ward seems to have learned about people skills.

It's a good episode, with the revelations. The actual mystery and plot tension is not as compelling this time around, though.

But all that is slightly forgivable. This is, after all, an origin story. We'll be seeing Blizzard in season 2…

Meanwhile, again, I can't help wondering: what happened to those kids at S.H.I.E.L.D. Hogwarts during and after Winter Soldier?

And remember when they said an 0-8-4 was something unknown, “kind of like you,” to Skye? It's not metaphorical anymore.

Coulson said he was tired of secrets. He wants to root them all out. Well, be careful what you wish for.

Not my favorite episode, but I'd still fit this into the good side.

What did you think of the view inside S.H.I.E.L.D.?