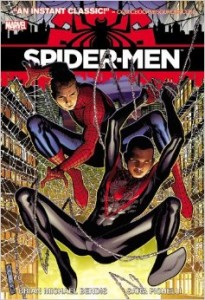 Usually here at Welcome to Level Seven we focus on Marvel 616 for Comic Files. Maybe this is a mistake since the Marvel Cinematic Universe (MCU) and Ultimate Universe share a lot of similarities. Recently a story from the Ultimate Universe caught our attention and forces us to dive into the Ultimate Universe. Spider-Men written by Brian Michael Bendis and illustrated by Sara Pichelli is a remarkable story that combines both universes while tugging at the heart!

Peter Parker, the Spider-Man of Marvel 616, is enjoying his city and stopping crime when he stumbles onto a mysterious light in an abandoned looking building. Inside he tussles with Mysterio who has opened a portal to another universe, the Marvel Ultimate Universe. Parker is pulled into the portal and finds himself inside a very different New York. Parker discovers a world where everyone seems to know that Peter Parker was Spider-Man and a young man, Miles Morales, carries the Spider-Banner. Parker explores this world and visits with his loved ones in this new universe. And he struggles with the question of, “is Peter Parker dead?” Morales and Parker work with Nick Fury and the Ultimates to find Mysterio and seek a path home.

Ultimate Nick Fury quickly catches my attention in this story. This Nick Fury, okay no Nick Fury, is far from cuddly. He is a cold-hearted killer that does what must be done. He has ordered the death of innocents in order to maintain the peace. Yet instead of locking Peter Parker up, he gives 616 Parker some freedom to roam the Ultimate Universe. Why? Because he admits that he made mistakes when working with the Ultimate Peter Parker. He owes Parker, and honestly he cannot make good with a dead man. So when given a second change with another universe’s Parker, he grabs it and Parker gets a long leash. And he does this despite the fact there could be horrible multiverse implications (insert evil laugh here).

I also love Parker’s reaction to this very different Nick Fury. He labels the Ultimate Fury as being “much cooler” than his older Caucasian Fury. And Parker informs Fury that he is White in his world, which garners a reaction that would make Samuel L. Jackson proud! In many ways these interactions feel like what would happened if the print and MCU versions of Marvel clashed, and I liked the reactions.

This story is really character driven. And the best parts of the story are watching 616 Parker interact with his Ultimate loved ones. They lost their Peter, and now an older copy of Peter has popped into their life. They are both naturally filled with questions about the different versions of themselves. And Parker does hold back on discussing the fates of some 616 versions. And one character honestly cannot handle seeing the ghost of Peter Parker. This also gives Peter a chance to reflect on what could have been. The Ultimate May Parker knew her nephew’s secret hero identity. How different could his life have been if teen Peter Parker had revealed to his aunt his superhero hobby? My favorite moment is Peter Parker blessing the Gwen Stacey/Aunt May relationship which gives both someone to look over them.

Spider-Men really is a fantastic story. And it is the character moments, not the action, that wins the day. This tale is a heart tugger, especially when the hard-broiled Ultimate Nick Fury reflects on his mistakes with Peter Parker. Spider-Men is a fantastic story that you really should check out.