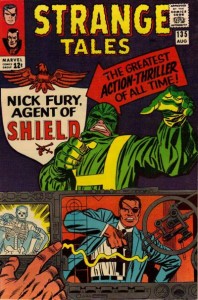 How did Army officer Nick Fury become a member of S.H.I.E.L.D.? What did early S.H.I.E.L.D. look like? When did they get flying cars? These questions can all be answered in reading Strange Tales #135 from August 10, 1965.

As the story , “The Man for the Job”, opens Colonel Nick Fury is being fitted for a Life Model Decoy (LMD). Fury is told about Supreme Headquarters International Espionage Law-Enforcement Division or S.H.I.E.L.D. and recruited to help counter the security threat HYDRA. Fury is introduced to the Council governing S.H.I.E.L.D and Tony Stark who creates special weapons for the spy organization. Fury claims to not be the right man for the job, a simple sergeant at heart not a Colonel or super spy. But when a HYDRA attack creates chaos on the Heli-carrier, Fury takes charge of the situation.

The S.H.I.E.L.D. story is followed by a Doctor Strange tale. Doctor Strange faces off against magical villain Baron Mordu. Sadly, Nick Fury is not present.

The more things change, the more they stay the same. This first S.H.I.E.L.D. story has plenty of story elements that will be kept throughout the history of this spy organization. On the very first page we see LMDs, the Heli-carrier is present (though spelling has changed) and yes there is even a flying car. Perhaps Agent Avery’s guess about Lola’s undercarriage is even more correct than I want to guess. Young Fury’s S.H.I.E.L.D. is very much a familiar organization.

This story is very much James Bond. Fury wears a simply blue suit. Tony Stark feels more like Bond’s Q than Iron Man. HYDRA feels like SPECTRE as seen in the movies. In the years before publication the movie audience had already experienced Dr. No, From Russia with Love, and Goldfinger while hitting newsstands months before Thunderball. Sean Connery’s Bond was a hit, and clearly Marvel was attempting to tap into that. There use of an established character without super powers and reworking him as Bond like makes perfect sense when looking at the popular culture of the time. Honestly, the penalty for failure within Hydra feels like a life straight out of the SPECTRE policy and procedure manual!

This Nick Fury is far from the polished super spy we all know and love. This Fury is a simply Colonel from the Army’s G-2 unit (Intelligence) who stated as an enlisted man. He does not see himself as someone who will have an impact on international events. How wrong he is! What the story makes clear is that Fury is the right man for the job, because despite any inexperience he has Fury still is a man of action.

Nick Fury, I think you can thank James Bond for the promotion. As I read through the Marvel universe, I see S.H.I.E.L.D. everywhere. It all started here in Strange Tales #135. And what I find the most amazing is how many things have stayed the same!