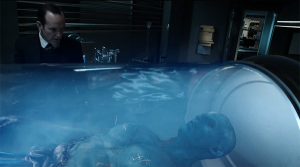 “I loved you in Prometheus!”

This one's about family, folks.

Our team? They're a family. They have fought together and fought with each other.

They have faced loss and are facing loss, with Skye on her deathbed.

And they are going to do anything they can to save her.

This is an episode where we know what is going to happen. Skye is not going to die. This show is about her as much as it is about anyone, except possibly Coulson.

So to get from Skye's near death to Skye's recovery…

* Coulson gets character moments that push him to get the answers he was already looking for, only faster. There is more urgency here.

* We meet a new agent. Garrett.

* We get orders disobeyed.

* We get characters making choices.

“You wouldn't believe what I could talk this son of a gun into.” ~Agent Garrett, about Ward? There's a heavy line with new weight after the revelations later.

Until a few episodes ago, I don't know if the writers truly knew how they were going to let Winter Soldier specifically affect the characters. But here? Things are hitting the fan, and you can see how almost everything is setting the stage with foreshadowing and double meaning.

Anyway, another enjoyable episode, and one that is pushing us toward a crazy climax to this story arc.

Too bad it had to end on some weak special effects…