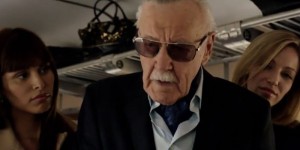 “Hello! This is not my worst cameo! But it comes close…” …said the clone of a general from World War 2.

From the Rashomon like style, seeing the same story from different point of views…

(Which reminds me, when this Agents of S.H.I.E.L.D. rewatch is done, I need to watch that movie. I also have a western called

…to the undercover antics of the time…

…to Ward trying to activate the holotable…

This episode is fantastic.

It has problems. Primarily, Stan Lee.

But it also is where the sense of direction for the show really started to be felt. A bigger conspiracy is hinted at, although the scope of it? Well, nothing prepared us for that!

What about you? How did T.R.AC.K.S. hold up on a repeat viewing?