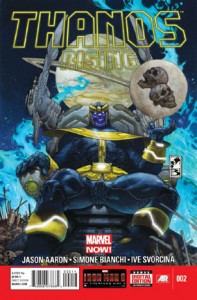 The first observation that a reader of Thanos Rising #2 will likely have is that this series has quickly taken a dark turn. Thanos is no longer the friendly likable boy that we were introduced to in issue #1. Instead now he has taken his first steps to being the monster that the Avengers will battle sometime in the cinematic future.

The reader is dropped into Thanos’ teenage years as this volume opens. Thanos has changed drastically since the death of his friends and classmates. The teen Thanos is still brilliant, but he has become increasingly intolerant and self centered. Additionally, he no longer hides from death but looks to explore it for scientific purposes. His explorations of death lead to his study of increasingly more complex creatures, which he has created Titan’s first scalpels for their dissection. He often chooses to conduct his explorations on living creatures. Thanos claims that his experiments are in the name of science as he attempts to understand why he is different and what his purpose in life is. Two individuals appear to understand Thanos’ emerging nature. The first is his mother Suri-San who accuses Thanos when Titan’s first murder is committed. The second is the dark haired girl, who pushes him to further explore his death. Her efforts to push Thanos down the dark road is reinforced by her spurning his love, further pressing his desire to know about his purpose hoping the answer will allow him to express the love in his heart.

It is far to say this series got dark fast. Everyone can agree that at the end of this issue that Thanos is a monster. The final page of the comic frames Thanos as truly being evil as he commits a truly unthinkable act. I think everyone can understand the quest for finding purpose, self understanding, and love. But the results in Thanos’ case are truly disastrous. And I think many of us can questions how far we would go in our own journeys. The young man with a bright future is gone. And all that is left now is the monster.

Compared to issue number 1 this offering is bloody. I could not let my kids read this since it is closer to Dexter than the animated Ultimate Spider-Man series. It is a tough story to get through due to just the increasingly brutal nature of Thanos’ actions. I did consider ending this series, but there is enough interesting things occurring that I want to continue. Maybe I should say I am compelled to continue to see what additional tragedies will strike the Titan as he ages.

I would also say this series is probably not something action fans want to pick up since it is very character driven. The content of this book is not mindless adventure and fighting, but deep philosophical reflection of love, purpose and evil. If you want to think, Thanos Rising could be the book for you. But if you do not want to think, I would suggest finding something else.

I was a little shocked to find out that Thanos Rising’s first issue was the #2 comic for April 2013. Honestly, the book is not one that would appeal to kids. And it would not be something that I think action only fans would want to read. I am guessing that the numbers will decline as the comic continues it story and the material gets darker. But there is something refreshing to the fact that story has found an audience.