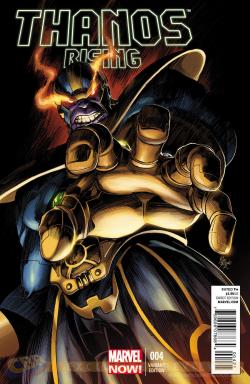 There was a time I felt like Thanos had some likeable attributes to his personality. That time is gone. Thanos is now a cosmic face of evil and redemption is something that may not ever be an option.

After completing his unspeakable act to win over his love, Thanos has become a pirate captain. He leads his crew in raiding, pillaging and destroying world upon world to please his dark-haired maiden who still withholds her affections. Thanos can no longer recollect all the murders he has committed and he plans to kill until his love is satisfied with his horrendous acts. Things come to a head as he questions how much murder is in his future, and in this confrontation the identity of his beloved lady is finally revealed. Broken, he discovers the one living thing he cannot kill for her love. Finally realizing what he has become he sets course towards his home of Titan and his awaiting father with his mind-set on death.

Thanos Rising #4 reinforces that Thanos’ acts of evil are based out of love. He wants/needs the affections of one dark-haired woman who has followed him throughout his life. He kills to satisfy her needs hoping for a touch or a kiss. But he has no idea how much mayhem is required to finally quench her thirst for death. And this quest has led to his crew believing him insane as he speaks aloud to himself and collects dead bodies. Thanos truly is the mad Titan.

Many readers probably predicted the identity of Thanos’ love in issue #1. The identity is expected, maybe even required, when you know the Thanos history. One of the big questions for me was Thanos born this way or did she nurture him into becoming a serial killer. She claims that she only fostered what was already there. And the reader should remember in the debate of nature versus nuture that his mother saw his true nature as his birth! In this story, Thanos always had a touch of evil in his heart! But still one wonders if a more attentive father and a more compassionate mentor could have transferred Thanos into a great man instead of a genocidical manic.

Well, maybe I am growing callous. Compared to other acts of evil that Thanos has committed in this series global genocide seems tame. Maybe it is the impersonal nature of his acts of evil? Regardless, Thanos has fully transformed into a face of evil by the end of Thanos Rising #4.