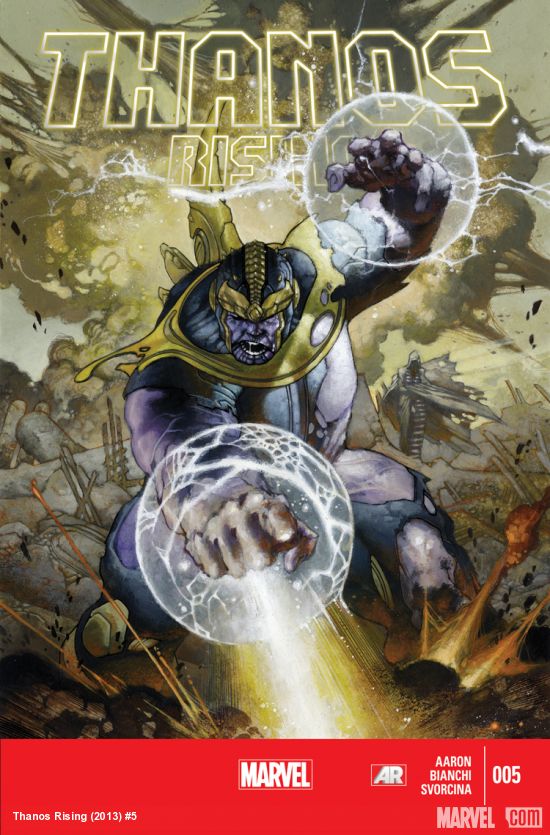 I read Thanos Rising for one reason, the fact I did not immediately know who was this purple guy at the end of The Avengers . And since he was there he had to matter right! In this series the reader really digs deep into the origin of this super villain and his psychological profile. As this series concludes in Thanos Rising #5 the reader does better understand Thanos and may feel “icky” in the process.

The mad Titan returns home. Thanos attacks Titan, a world without weapons, making an easy target for this genocidal manic. Thanos makes it clear to Death that he intends to marry her with this final conquest in his sight. The struggle concludes with him confronting his father Mentor, and Mentor questioning if Death is truly real! Is Death actually Thanos’ loving companion, or is she a figment of his imagination. In the end, Thanos is faced with a question of his own sanity and the boy who loves is gone forever!

Is Thanos crazy or has Death actually courted him his entire life? That in many ways is the big question. My personal theory is that Death is “alive”, because Deadpool sees her too and has his own crush on the Grim Reaper. Honestly, Death seems more compassionate to Deadpool than Thanos. Really, Thanos should get out of this relationship and make way for the Merc with a Mouth! So I choose to believe that Death is real in this story not a figment of Thanos’ imagination. Of course that is my opinion only and you are free to make your own choices.

Thanos Rising is brutal! What is the word when you destroy entire worlds? It goes past genocide. He even brings it home to Titan. As a reader you either will feel queasy when this is done or you have become desensitized to death. There is no redemption, there is no happy ending, and Thanos is no hero. I love villains that we can redeem. If you like that theme too, go look somewhere else!

Thanos Rising is over and it is time for us to move onto Infinity. Thanos will continue to headline as a big bad in that mini-series. And if anything following Thanos Rising shows us how truly evil the Mad Titan is!