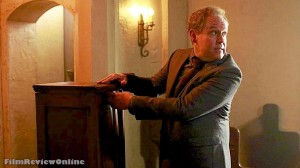 “Yes, I'm in this episode, and yes, I'm more awesome than you expected.”

“You know it'd be nice if, for once, Thor and his people sent down the god of cleaning up after yourself. He'd probably have a magic broom for this kind of thing.” — Agent Coulson

That little line there was one of the highlights of this episode.

The promise was that this episode tied into Thor: The Dark World. And the cold open does. it really, really does. Quite nicely. We get some cute interactions from our team as they clean up after the battle of Greenwich(?). It seems like a slightly innaproriate use of the team's abilities. S.H.I.E.L.D. would have a dedicated clean up team, right? Then again, responding to 0-8-4's is part of what they do.

No matter, the cold open is cute and a nice tie-in.

The convenience and coincidence bothers me.

But I love, then, when the episode moves away from the cold open to the actual story. A tree in Norway holds an Asgardian staff. A Norwegian pagan hate group wants the power it holds. The power of the staff enhances and brings hate to the surface.

The themes in this episode are rich.

“Some feelings will take over if you dwell on them.” Agent Ward

One thing in the cold open as they are cleaning up really sticks out. FitzSimmons are interested in an alien artifact, and Ward snatches it quickly and seals it away. “Out of sight, out of mind.” It's going into storage. And it's possibly coming out of storage…around the time of Winter Soldier.

And then you have Ward going off on the team as the effects of touching the magic Asgardian staff take him over and the flashing back to Ward and the well. There are still many questions, but here is where it feels like they knew what they were going to do with Ward.

Here is where May also seems to feel like she knows what she's going to do with Ward.

Professor Randolph is another character we need to bring back sometime soon. So, Thor: The Dark World tie-in? No. I kinda hate that. But taken separately, the cold open and the episode are both fun, and the main action expands the MCU nicely.

And we see Tahiti, and the magical place it can be.

I'm enjoying these Agents of S.H.I.E.L.D. episodes, and rewatching, frankly, is both tiding me over until season 2 and getting more more excited for season 2.

And what about you? Are you disappointed they didn't go after the giant frost dog for the tie-in? Was this episode satisfying? Sound off below!