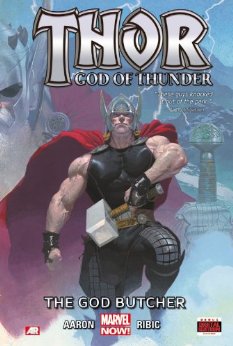 I look at Thor, expect in the MCU, as being a high fantasy hero who has never caught my interest. This is the man (God) who fights trolls and dwarfs. I tend to prefer more non-divine superheroes. But with Thor a very active member of the MCU, I had to see if the Marvel NOW! Thor in Thor God of Thunder: The God Butcher would catch my attention.

In 893 Thor defeats an Ice Giant pestering a village in Iceland. While eating, drinking and making merry a dead god’s body washes to shore. On the world of Indigurr today, Thor discovers a world with no gods. His investigations lead him to discover an entire pantheon of alien gods murdered. His discovery reveals to him that Gorr the God Butcher is still alive. And in the future, Thor sitting on the throne of Asgard is the last god alive as Gorr has massacred all others. The volume follows Thor in the past, present and future as he stalks and is stalked by Gorr and the reader is led to the question of what happened in the cave between Thor and Gorr and why does Gorr have a vendetta against every God pantheon. The volume ends with a cliffhanger that promises to provide Gorr’s origin in the next collection.

Thor God of Thunder: The God Butcher collects Thor God of Thunder issues 1 through 5 written by Jason Aaron and illustrated by Esad Ribic. I have read and generally liked Aaron’s writing in the past. But I am unfamiliar with Ribic’s work. The imagery is largely the stylized style, including Thor’s speaking voice that I have seen in other books that include Thor. And often I generally dislike that style. But here since it’s a cohesive whole, versus being dropped into a team book with other styles, seems to really set the tone of a book about a god. The big question is if Marvel NOW!’s goal is to start me off fresh, would I pick Thor up again. And I would say absolutely. Much of this is due to the story and my desire to know what caused Gorr’s anger against gods, an anger so deep he is killing not just his but all Gods in the universe.

Speaking of images, I really did like Ribic’s illustrations the more I think about it. There is an 893 battle in the sky between Thor and Gorr that I could only call epic. Sometimes my mind skips over fight scenes in comics, here Ribic fully had my attention.

We see a lot of gods in this book. The story establishes that every world should have a pantheon or pantheons of gods. For example we have both Asgard and Olympus in our world. Gods should provide relief and support to the mortals of their worlds. And we discover that worlds fail to behave correctly without gods to guide the weather and other natural events. But we also find that gods as a group are selfish, which makes me think they helped create the God Butcher.

Gorr is really the character that I am most interested in here. I did fine him visually interesting. But it is his character arc that I am most fascinated in. If I could predict an origin I would guess that he was an ordinary person who was hurt by a selfish stupid god. If I had to guess, a loved one was killed by a god and this is what sparked his anger and change to a godicidal murderer.

We do get a character arc on Thor. We see the young, foolish, act 1 of Thor thunder god in 893. In our present day we get more experienced, smarter and caring The Avengers Thor. And finally we have the Odin like king of Asgard, who rules over a kingdom of nothing. Sometimes jumping around like this irritates me as a reader, but here it really was peeling back the layers of a story as we compare Thor’s interactions with Gorr at different times in his immortal life. And I appreciated that you could clearly separate the different personas eons apart.

Thor God of Thunder: The God Butcher you did your job and I will be back. With a compelling villain with what has to be an interesting and human (okay Gorr is not human) I want to dive into this backstory. I wonder if Aaron has created a villain for Thor that will stand the test of time!